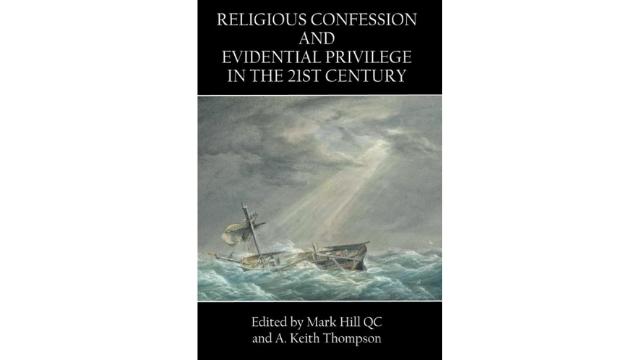 The struggle for confession. 1. The Australian controversy

A very important book critically addresses proposals that laws protecting the confidentiality of religious confession should be abolished.

Religious denomination and privilege of proof at 21st Century (Cleveland, Queensland: Shepherd Street Press, an imprint of Connor Court Publishing and The School of Law, The University of Notre Dame Australia, 2021), edited by Mark Hill, a prominent British lawyer, and A. Keith Thompson, professor and associate dean of law school at the University of Notre Dame in Australia, with a foreword by former Archbishop of Canterbury Rowan Williams, may well be one of the most important books on religion of 2022 (the year in which it was actually published, although it bears a copyright date of 2021). I will examine it in a series of subsequent articles, divided by geographic focus. In this first article, I will focus on Australia.

The subject of the book is the assertion, born out of horrific cases of sexual abuse perpetrated by Catholic priests and ministers of other religions, that laws protecting the confidentiality of Christian confession and similar practices in other religions should be deleted. What Rowan Williams calls a “troublesome legal attack” on a long-held legal principle (9: quotes in this series refer to Hill-Thompson’s book, unless otherwise noted) rests on the idea that religions have protected sex offenders by hiding behind the seal of confession. The clerics countered, as Williams writes, that “the ‘seal’ of confession is not – as some critics claim – a form of malignant secrecy but an assurance that all kinds of destructive and damaging behavior can be exposed. , named and recognized for what they are” (8). If the courts did not recognize that confessions made to a religious minister are confidential, they would ultimately not be made at all.

The book examines the situation and the controversies in six different countries: Australia, the United Kingdom, Ireland, Italy, Norway and Sweden. It could have been extended to other countries like France, where similar issues were discussed after a 2021 report commissioned by the Catholic Church into the sexual abuse of minors perpetrated by Catholic priests suggested that the number of cases could have been much higher than it was. previously believed. Collective books, however, have limitations, and this is already a 300-page volume.

Australia is one of the countries where the issue was first raised, with the failed attempt in 2003 by controversial Senator Nick Xenophon, who led a crusade against the Catholic Church and “sects”, to coerce South Australian religious ministers to disclose the contents of the confessions. in cases involving child sexual abuse.

The 2017 report of the Royal Commission into Institutional Responses to Child Abuse recommended that Australian state and territory governments eliminate denominational privilege in child sexual abuse cases. Most Australian states and territories followed the recommendation, creating conflict with the Catholic Church, which immediately responded that priests would go to jail rather than breach the sacred obligation of confession. Those who obey Australian laws will be excommunicated, the Australian bishops have said.

As Robert Netanek and Patrick Parkinson explain in their chapter, in 2020 some Australian Catholic bishops, following a suggestion from the Royal Commission itself, tried to find a solution where the privilege of religious confession would be maintained but the Priests would be instructed to withhold absolution until penitents who confessed to child abuse sins reported themselves to authorities. However, the bishops write to the Vatican, whose apostolic penitentiary, competent in matters of confession, replies that “absolution cannot be subordinated to future actions in the external forum” (89).

In his chapter, A. Keith Thompson notes that the current status of religious denominational privilege in Australia is not entirely clear, as the new laws which followed the Royal Commission’s report contrast with other standards which do not have not been repealed. Thompson reports that laws protecting privilege have been introduced in Australia and New Zealand since the 19and century, following controversial cases where public opinion largely sided with the priests, while the position of the Royal Commission was “an under-theorized reaction to a moral panic” (58). His criticism of the Commission and the new statutes is based on four arguments.

First, as Jeremy Bentham (1748-1832), the English philosopher who was no friend of religion or the Catholic Church, argued in the early 19and century, “by the time the constabulary would be known to have harvested its very first confessional secret, the well of such secrets would dry up” (45). Criminals would not confess their sins to priests and ministers if they knew that what they confessed would be reported to the police. Second, in practice very few perpetrators and victims confess incidents of sexual abuse to priests and pastors, and when they do they try to be vague about the details, so a report hypothetical of the minister would be of little use to the authorities. Thirdly, the mandatory information report that ministers learned outside the denomination, which the Catholic Church and other Christian denominations do not oppose, is the real key to improving the protection of children, as the experience of several Australian states shows. Fourth, the Commission’s argument that the repeal of the religious denomination privilege would not violate article 18 of the International Covenant on Civil and Political Rights relating to freedom of religion or belief, as this provision allows a “restriction” justified by “public order” and “public morality”. is faulty and is based on an “erroneous interpretation” of article (60). In fact, not all restrictions are justified, the sphere of conscience (in this case, of priests and ministers) must remain inviolable, and the Commission has not proved that the same results cannot be achieved without seriously violating religious freedom.

The Royal Commission, Netanek and Parkinson argue, also made factual errors (as it did, as Holly Folk demonstrated when writing in bitter winter, about Jehovah’s Witnesses). He did not buy the Catholic bishops’ argument that confessions almost never contain material that would be helpful to the police in preventing further child abuse and identifying the perpetrators. The Commission relied on two main sources. The first was the claim by Australian defrocked priest Michael Joseph McArdle, which the Commission quoted from British anti-Catholic journalist John Cornwell’s book, The Dark Box: A Secret History of Confession (New York: Basic Books, 2014), that he had told other priests about his abuse some 1,500 times in confession. However, the Commission did not consider that the judges in his case viewed McArdle as a pathological liar, and he tried to use the story of the alleged confessions to deflect blame from himself to the Catholic Church.

The second source was a qualitative analysis of nine sex-abusing priests who agreed to speak to him by Irish psychologist Marie Keenan. The Commission relied on Keenan’s finding that eight of the nine priests disclosed their abuse in confession. However, Keenan also indicated that they did so without disclosing any details that could have identified themselves or the victims. Some members of the Commission were perhaps unaware that in Ireland and other countries, including Australia, in many Catholic churches, penitents can go to confession while hiding behind a railing. Those who do not want to be identified can also go to confession away from home, a common practice among Catholics.

“will probably avoid confession altogether; or alternatively, they may exploit the potential of the confession rite prevalent in Australia to confess anonymously and non-specifically” (104). Netanek and Parkinson’s conclusion is that the new laws against privilege of confession would not save a single child from abuse, yet they set a dangerous precedent that threatens religious freedom generally.