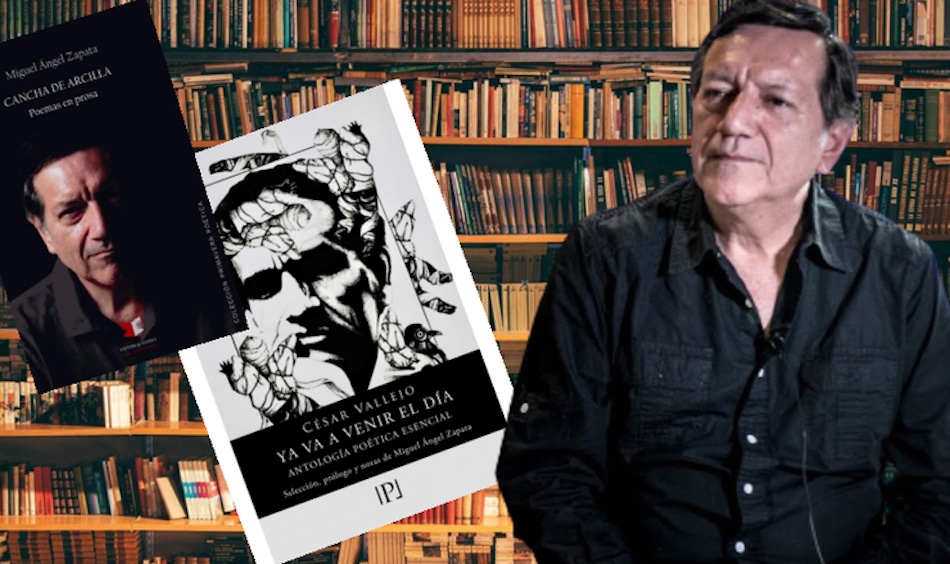 “The poet cannot live in harmony with the world”.

In a reality like ours, what paths does art offer us? The great poet Miguel Angel Zapata* de Piura welcomes us.

-Before discovering himself a poet, he was interested in painting. What first attracted you to art and its various manifestations?

-Since I was a child, I was fascinated by the imagination of color and I just wanted to draw, paint and paint. All children are painters. I obeyed the color and I also patiently learned to interpret the paintings of Rembrandt, Van Gogh or Goya. I worked in watercolour, tempera and later in oil. Everything is born from the observation of objects, and the art of penetrating their soul. I realized over time that I wasn’t going to be the great painter I dreamed of. At least until today, I still have a very close relationship with painting. To see a painting again is to reread a great poem. I always come back to Rembrandt’s “Philosopher in Meditation” or Goya’s “Half-Down Dog”. That’s where the real poetry is. Then came written poetry, that is to say the pen as a brush.

-In poetry, you worked on prose poetry. Is there a particularity of the poet in prose compared to the poet who writes in verse?

-The prose poem is freer, it opens the field without any limit. I write in verse and prose. I once said that the prose poem is like playing tennis on a clay court, from which emerges the perfect movement of disharmony. The prose poem comes out without much thought, it flows from the mind creating a surface full of variations. It’s a forest full of symbols and signs: an exercise in the art of “stumbling over words as on cobblestones” as Charles Baudelaire suggested. The prose poem is a hybrid march, an intense mix where a micro-narrative enters as a short essay or a fleeting image, and without rhyme. Hybrid sky, hybrid page, mixed fabric.

-Even poetry giddy with pain is a celebration of life. There is Osip Maldestam, Ana Akhmatova, Paul Celan or César Vallejo. It’s just another way to celebrate it. Not all celebrations come with a fake smile. Pain, love or apparent happiness are part of the fleeting transit of our existence. It has already been said that if we have not experienced pain, we cannot experience the longed-for happiness. Poetry follows this path, this malaise. In my case, in a natural way, poetry adheres to this search for balance, that the sun is as wonderful as a spring, or the sea or a tree that can say something about the weather without uttering a word.

-How do you understand the role of friendship in the poet’s quest?

-Friendship is loyalty, the good that the present brings to our lives. There, the reason does not intervene but something which dictates directly from your brain to your heart. I have good friends who are also good poets. It’s ideal. If a musician is out of tune, you must remove them from the group. Friendship should be as eternal as the sun, as eternal as poetry. That is why traitors must be avoided, and in the world of poetry there are many of them.

– Does the poet live in harmony with the world?

The poet cannot live in harmony with the world. Poetry always goes against the grain. At least good poetry always contradicts the rules and also the absurdity of routine. That’s why it’s written, that’s why it’s said. In this case, the language may be at odds with the world, but the equivocal signals of some obscure experimentation bring nothing new either to poetry or to the world. The world is already in chaos, and poetry does not pretend to change anything or to be revolutionary, but to write and write like a lizard out of whack. There’s Blake, Alda Merini, Quasimodo.

-You have published abroad, you live in the United States Do you think your poetry seeks to respond to a specific spatio-temporal reality, or to something deeper, more elemental in man?

-I write poetry in movement. I’m always on the move, even in the neighborhood that isn’t my neighborhood. Space is always temporary, especially in a person who travels and has no sweet home anywhere. My ideal space for several months is the university where I am a professor, for example. The hearth, the house happens in every place where one writes. I create my own imagination in each city or in the houses where I have lived. It is something deeper. Now I answer your questions near a dyke, near the sea which is the same everywhere on earth.

– What is your conception of evil?

-Evil does the opposite of what your good heart dictates. The heart is always right. Evil is that huge stone that you find on the road, that a human being put there to knock you down. Stones are to be avoided. Sometimes I would like to think like Leibniz who said that good is more abundant than bad, because we live in the best of all possible worlds. But the evil is there with the poison of selfishness, tradition, envy and resentment. Evil does not let you write well. Therefore, it is better to open the windows wide and write without religion, always listening to the song of your good heart. To paraphrase the opposite of John Milton’s Paradise Lost, I would say: better to reign in peace on earth than to serve in hell. Hell is a symbol, it’s living without flowers on your desk.

– Living in Peru in particular, one cannot help but think of the evils that we as a society have normalized. Corruption, lies, crime: how, as a poet, do you deal with these evils so earthly, but to a certain extent so inherent in man?

-Poetry is celestial but also terrestrial, it is on the road, in the streets and also in the forest and in the sky. It encompasses everything. Corruption in Peru is not new, it dates back to the time of independence. Peru lives in an era of uncertainty and death, no one knows what might happen, but people feel it. Crime progresses every day with death by hand, and corruption reaches – since political independence – its maximum splendor under the careless eyes of all Peruvians. As a poet, I must say what I think, I have the right as a human being and as a Peruvian citizen to express my disagreement with the current government and its entire cabinet. Peru, conscious Peruvians do not want to return to the life we ​​had during the Shining Path terror, nor suffer the consequences of a disastrous economic policy that closes Peru to international markets.