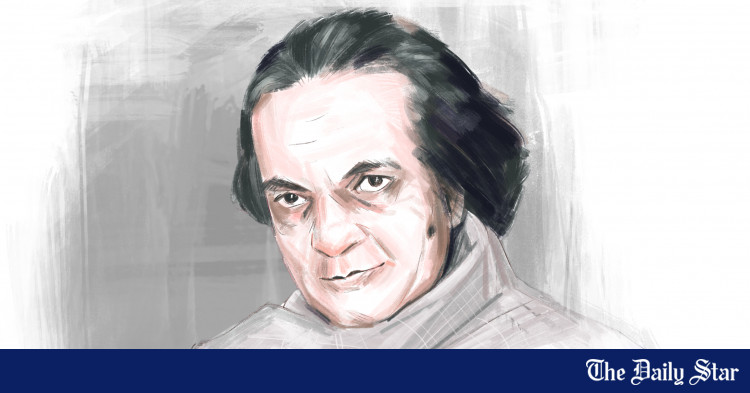 The origin of OM: the aura of Ahmed Sofa

The poet resembles this prince of the clouds

who drives away the storm and mocks the archer:

exiled on earth in the midst of a booing crowd,

its enormous wings hamper its progress.

With the death of Ahmed Sofa on July 28, 2001, Bangladesh (or modern Bengal from a historical perspective) not only lost one of its most original thinkers; it also marked the passage of an era. In death, as in life, Sofa found himself on the wrong side of power, which is why his demise was shunned by the powers that be and mourned only by a handful of friends and co-workers. For my part, I have never been ashamed to express my admiration for him.

Ahmed Sofa has been engaged in major issues of the times in Pakistan and Bangladesh for at least four decades and has provided a unique intellectual ground of resistance to tyranny, injustice and inhumanity in his homeland and beyond. Today, some 20 years later, his work, distinguished by both its depth and clarity of thought, continues to speak to thousands, if not millions. In this tribute, I will not appeal to his various interventions but will invoke one of his enduring contributions. As a storyteller, Sofa became, in the words of Walter Benjamin, “the figure in which the just man meets”.

But what is a storyteller? For Benjamin, he is a craftsman, a worker in a way: “The narration that has long flourished in the work environment – ​​rural, maritime, then urban – is itself in a way an artisanal communication. does not aim to convey the pure “in itself” or the essence of a thing, such as information or a report. He immerses the thing in the life of the storyteller, in order to bring it out of him.

In 1976, the year I met Sofa at the University of Dhaka, it had already been two years since he discovered his vocation as a thinker surrounded by an incomparable aura. He had already joined “the ranks of masters and sages,” as Benjamin would say. What can be the basis of this aura? It lies in “the ability to trace back through a lifetime”, a lifetime that includes not only one’s own experience, but also the experiences of others, what he knows for himself as well as what he knows by hearing. -say. “His gift,” says Benjamin, “is the ability to tell his life; his distinction, to be able to tell his entire life.” The storyteller is a relative of Plato’s Socrates: “I want to tell you a story. You might think it’s just a story, but to me it makes sense.”

Ahmed Sofa was able to produce two slender poetry collections, “Time the Hangman” and “Songs of Sufferance” in 1975. Earlier, in 1974, he published the short story, Omkar. With a traditional realistic novel, a collection of short stories, and a bouquet of children’s tales from before, Omkar is the first work with which Sofa discovers what is most his own narration, allegory. This made all the difference between it and the rest of late 20th century Bengali literature. The signifiers “om”, kit and caboodle will henceforth follow his path until the writing of his last tales. Its denouement would be evident in AlachakraCircle of Desire, made a decade later.

Thanks to Holiday, Omkar came out in an English rendition in 1975. Introducing his translation much later, Roushan Jahan put Omkarthe story of in a capsule: “the story of a young mute [sic] daughter, who refuses to accept the physical limitation and after persistent and desperate efforts, finally manages to master the disability.” The story, however, goes a little beyond this challenge.

Set in historical time, a period out of joint in East Pakistan, the story draws on a formative phase of the new Bengali Muslim middle class. The story is told as the fable of country lawyer Abu Nasr, also the girl’s father, who made a paltry fortune as a collaborator of the Pakistani military regime. The simple fable, in Jahan’s take, “has surprising depth, breadth and resonance”. Abu Nasr, in one typical blow, kills two birds, marrying off his physically handicapped daughter to an upstart and still neutralizing a rival clan. Told by the girl’s husband, “a shy and passive young man from a descending mobile family”, as Jahan comments, “the two main strains of the story – the public and the private – fit together beautifully. “.

The climax of history coincides with the beginning of the end of old Pakistan, when the myriad of Pakistani peoples united against the military regime of Ayub Khan and East Pakistan rose up, unwilling not accept the loss of self under neocolonialism, in the face of the decline of identity and dignity. Ahmed Sofa opens the myth of the origin to an allegorical look.

An everyday story comes to a head when the speech-impaired girl, an urban housewife, becomes desperate in her attempts to speak. Passionately forcing her glottis, she managed to pronounce “Bangla” at the end of the day, but lost consciousness and began to bleed from the mouth. It is significant to recognize that a signifier represents a subject for another signifier, and not for another subject. What is also significant is that Sofa does not reveal the name of the girl or that of her husband. His attempt to utter a signifier is prompted by roaring sounds out there, the fury of walkers on the streets of Dhaka, meaning something; thus connecting Erlebnis (or everyday experience) with Erfahrung (or long-standing historical events). This is a story told by no idiot. It tells the story of a transformation, producing logos from myths. Omkarin other words, rises to the rank of allegory.

As the first-person narrator recounts: “All these years she expressed every feeling of joy and pain, of wonder and frustration, grumbling like a dynamo. What pains of expression she must have suffered. Now the procession passed our house. It was like the crater of a volcano. The whole country seemed to be in long labor. The cries of these people were those of a mother in labor. I was trembling. It seemed that the Bangladesh, its sky, its air, everything was shaking. Suddenly my wife jumped off the ground and said “Bangladesh”. Finally, her mute [sic] voice spoke an intelligible word. She fell unconscious and was bleeding. I looked at the blood splattered floor, then at my wife.”

Ahmed Sofa could well have left the myth there. Dissuaded by a thesis which claims that “the style is not the man himself but that to which the man is addressed”, the narrator adds: “A question arose in my mind, ‘whose blood is the redder? That of Asad, the martyr, or that of my mute wife?'” This veil of choice serves as a subtle propaedeutic to the inaugural signifier om. Since there is no metalanguage, everything depends on how the story unfolds. It is the story that shapes both the signifier or existence and the signified or its meaning.

The heights Sofa reached, the huge wings he carried, the storms he haunted and the archers he ridiculed, of course, were not without price. He had been charged as a German agent or even “man of Gaddafi”. These attacks were not merely defamatory of Ahmed Sofa’s identity as a Bengali Muslim and his dignity as a thinker, but were part of a much larger scheme to undermine the cause he staunchly championed, the cause of workers and peasants in a nation that was spilling buckets of blood. in the struggles for prestige, in 1947 and in 1971.

Salimullah Khan is a professor in the general education department of ULAB.

Writing Secrets and Other Tools of the Trade | Latest India News