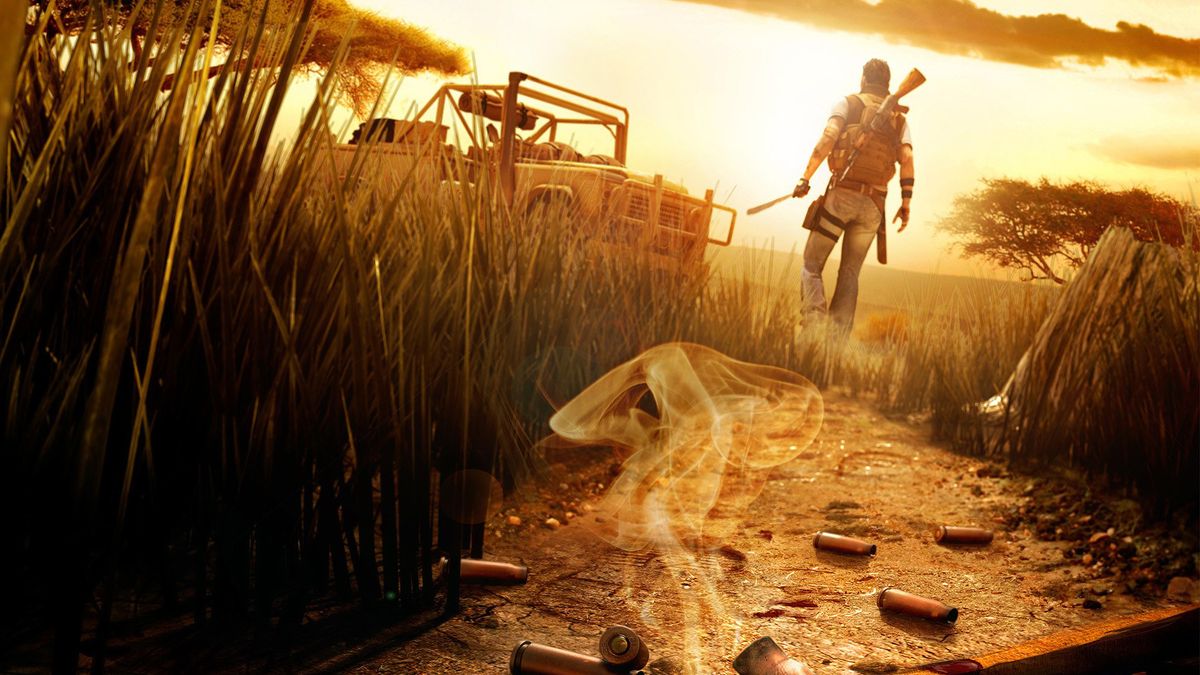 This diary first appeared in issue 366 of PC Gamer magazine in January 2022. We do one every month, taking on new challenges and approaching our favorite games from entirely new angles – and letting you know how we are doing. we got out.

You emerge from the iron shack into a bright dawn, a blue hour vision of crushing darkness and saturated color at the whispering of strings, full of tension. In front of you, an expanse of scrubland that vanishes into the gleaming desert with the blushing horizon. But in front, there is a car.

It’s kind of a sports car, but you know it was born in a second-string factory in the ’80s, its sharper corners now outdated, its metaphorically cut corners. The racing scratches get lost in a plating of rust and rot. Yet you know that car was someone’s pride and joy, the result of many night shifts and dreary days. It is now a powerful symbol of the deterioration of the UAC. Misplaced money, exploitative imports, shattered dreams… Then a cloud of dust in the distance signals that this moment of reverie is over, and that someone has to be shot in the face.

That moment stayed with me for over 13 years. It was one of the most vivid places I have ever been and sits with other distinct and sacred memories both real and virtual, from approaching Rapture to the wonders of the Maasai Mara itself.

I loved Far Cry 2. It had an atmosphere and cinematography that Vittorio Storaro would have been proud of, and a soundtrack featuring Baaba Maal. There was a lightness of touch that demonstrated that the developers trusted the player to fill in the blanks, if they provided a sufficiently immersive experience. I had mostly dreamed of an FPS Elite, a truly open world in which I could live, and approach it as I saw fit, with as few breaks in the staging as possible. I was not deceived.

I loved the map and GPS you hold in real time, the healing animations, revived and then transported to safety by acquaintances, and the surrounding desert providing the sweetest of invisible walls. It all worked to maintain immersion, even if the game’s desire for verisimilitude worked against the tide. The prevailing opinion was that much of this sucked.

Most were irritated by the recurring bouts of malaria, but I thought that was genius. Likewise, both sides in this war, equally mired in murder and corruption, want to kill you no matter what you do for them. This means everyone is shooting at you, all the time.

“I can’t drive anywhere without being chased,” was the common complaint among people.

To which my response was, “Did you drive places?” If you weren’t hiking in the mountains to watch the sunset over the savanna between missions, you were playing the game poorly. I guess this is where players started to diverge, now that the worlds were sufficiently open and real, between those who were all about “splodes and mayhem”, and those for whom walking simulators would later be designed. The latter would populate the hills and forests of Day Z and Rust, harassed by the former, before leaving to fall in love with Delilah in Firewatch.

I’ve been wanting to go back to UAC, and it’s the hiking, the sunsets, and the zebras that I’m looking for. A holiday. I’m not interested in the journey to the heart of darkness or nihilism, I’m not even after the Jackal as such. It’s just an optional day trip.

So no unnecessary deaths. No weapons. No moral relativism. Just a good time.

I take the taxi from the airport, that’s how every vacation starts. I see the inhabitants fleeing, abandoning the battlefield to Western thieves. It’s okay, I’ll leave all that behind and “see real UAC” like an authorized backpacker.

I don’t remember the intro tutorial being so linear. Malaria dominates the opening scenes. I pass out and wake up to meet my target, the Jackal, who quotes Nietzsche as a right-wing teenager. I escape a firefight in the city with no bloodshed, before fainting again, only to be rescued by one of the many militia parasites. He sends me on my first kill, but I’m on vacation so I get in the waiting coupe and try to leave. I hit an invisible wall in the universe – another severe dose that sends me right back to where I started. I’m not going to go sightseeing until I have medicine.

So I’m stuck clumsily stealthing through a maze of narrow valleys and dark ravines, under overcast skies. I’m noisy without any of the buffs and I get quickly done. I can’t detonate a red barrel without unloading a full magazine into it. I will at least need a more powerful gun. I already have a shopping list, which will require diamonds, so I have a lot of work to do. Between claiming my car is an “environmental hazard” and my machete, I jump hoops and get a lead on some drugs.

I notice that the GPS is now clear… So once I have my chloroquine, or whatever, the break can begin. I wanted these savannas, these zebras, these deserts, these skies. Now I can have them.

My memory was of walks, views and special moments. Once I climbed a mountain and found an abandoned village that belonged to a people largely untouched by the Imperial West. Arrived before the mission it was designed for, felt like turning a corner in the Jordanian rocks and seeing Petra for the first time. At the very top of this climb, I found a hang glider. I took off and rolled into the blue sky, seeing the lush landscape below and the deserts beyond, animals scattering before me. I was a bird. It was over in seconds and when it was done, it was done. They weren’t marked on the map and I never found another.

Now I’m stuck in choke points, chased by insanely fast jeeps by mercenaries with X-ray vision and infallible marksmanship. Everything I drive stops after being shot, which means I can’t outrun anyone. It’s possible to avoid trouble by getting around obstacles, but it takes a patience that I no longer seem to possess. I was spoiled by Rook and Kyrat Islands. My daughter and I played Far Cry 5 together and often stopped killing cultists to enjoy the sports and views. It was always an easy option, even with deadly wildlife.

Laboa-Sako, the northern part of UAC, is significantly less appealing than the south, where after a lot of hard work, I continue to find many little wonders I seek. But even on the edge of the desert where the metaphorical diamonds are, it’s a bit like going on vacation to a place you loved as a child, but now… It’s smaller, browner, less full of potential than in your memories. The smaller beaches, the arcades running out of games, each less thrilling than it was but ten times more expensive. There are still little beauties to be found, but if you’ve ever been to Vegas, Prestatyn seems tiny, because it is.

But I see my animals, managing not to hit them all with my car. I see amazing sunsets and vistas. I get a lot of rain which ruins the pictures, but it’s the holidays for you. And I find my old village, but it is full of expatriate monsters with mortars. I guess, at least in this game, if I shoot someone in the head they will die, unlike the less considerate soldiers in Yara.

And that’s the catch. This time I’m on vacation, but for someone on safari, I spend a lot of time macheting people to death. It’s necessary self-defense, of course, but I might as well use a gun. So, accepting that rules are made to be broken, I grind and arm myself with the M-79 grenade launcher…

Far Cry 2’s subtext, as it stands, retreads Joseph Conrad’s Heart of Darkness, or more specifically Coppola’s Apocalypse Now. The assassin travels a ravaged world in search of the most responsible, inevitably adopting the same methods, and in doing so, is infected with the same disease, literally and figuratively. Opinion is sharply divided on whether Conrad’s masterpiece is a vicious dismantling of European colonialism, or a profoundly different piece of racism, the smarter money being on both. The concept was best served by Spec Ops: The Line, but it remains the de facto theme of the Far Cry series, with starkly contrasting hits and states of dissonance.

The first round, I got really good at it all, slipping unnoticed from place to place and playing both sides against each other. Slowly these mercenaries started talking about me with fear in their voices. And I was a monster. I’d shoot someone in the leg to make their screams bring their friends to my headshot party. It didn’t matter, because everyone was a Western colonial intruder who had no business in the UAC but exploitation and greed.

Finally, tired of being a shadow and the boredom of invincibility, I traded in my sniper rifle for a rocket launcher or two. I destroyed everything. People, buildings, vehicles, trees and grass. I shone with the brilliance of a thousand suns. I knew then that it was time for the endgame, to face the jackal… and to discover a warchief who had come to regret his deeds, just as I had come to revel in mine.

Having the M-79 back makes killing effortless. Satisfying. I see the roadblock and try to get around it, but I challenge them to spot me. “Try it,” I think. It becomes, “I’ll teach you how to mess up my shiny Jeep.” I thought it would make murder less disturbing, but it just makes it less personal, even funny. I change, and that changes the nature of the journey. My notion of a good time shifts like a snake.

The idea of ​​snatching a few minutes of magical serenity between the serious business of surviving a civil war, as a counterpoint to violence, corruption and decadence… it worked. He made the sky, the sun, the animals, the sandy desert and the forests sacrosanct…all safe from violence. Killing people so I can enjoy them in peace eases that fear. I slaughter mercenaries, because I can’t reach hang gliders. I’m worse than the monster who was waiting for me on that last pass, worse than the man who hunted him 13 years ago.

The jackal misunderstands his Nietzsche, of course. There is nothing inevitable about what happens in UAC. The ‘power’ in ‘will to power’ is not Kraft – control and force – it is Macht – sublimation, self-transcendence and selfishness, channeling force for creativity. I look at my photos. That’s what I did ? yuck. I need a shower.

Cycling is really hard, but ballet is even harder’ – the Swedish runner who was once a ballerina