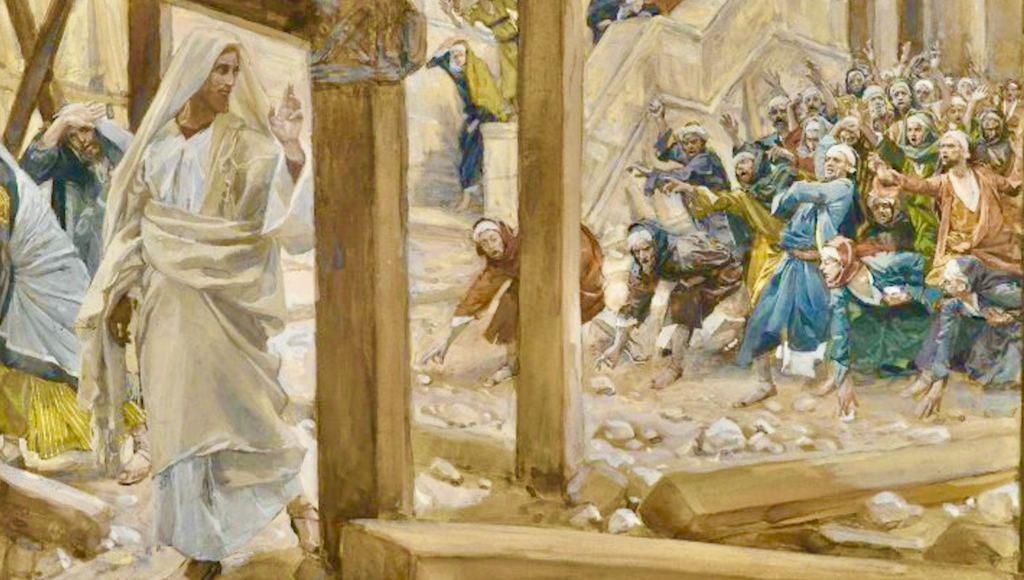 A radical polarization is happening today. Knowing better, people interpret others as short-sighted and selfish, demonize their affiliations, and plague them with imputed evil. The difficult question we face is political: how long can we maintain our constitutional forms? The even more difficult question, however, is what it means to follow Christ’s law of love.

Another election is approaching, which means accusations, distortions and misunderstandings, often deliberate, dominate public discourse. It’s easy to become bitter when you see your own reasonable opinion twisted and distorted. But it helps to put our polarized situation into context. A book I recently read about Atlanta during the Civil War unexpectedly sheds some light on our contemporary scene. In part of Bonfire: The Siege and Burning of Atlanta, Mark Wortman shows how secession fever came to Atlanta.

As an epigraph to these chapters, Wortman quotes a famous passage from Thucydides History of the Peloponnesian War, which our freshmen at Wyoming Catholic College read in the spring semester. The hatred between the common people and the rich oligarchs of Corcyra at the start of the Peloponnesian War was so radical that “the words had to change their ordinary meaning and take what was now given to them. Reckless audacity came to be seen as the courage of a staunch follower; cautious hesitation, specious cowardice; moderation was seen as a mantle for manhood; ability to see all sides of an issue inability to act on any. Frenzied violence has become the attribute of manhood. In such circumstances, the word “good” means whatever serves one’s own interests. In Atlanta in 1860 and 1861, there were many people—in fact, even many slave owners—who considered themselves part of the Union, enjoying the American heritage of George Washington and the Founding Fathers. Their reluctance to join the secessionist movement puts them increasingly at odds with the vehement majority around them. Over time, simply to survive, they fell silent or converted to the secessionist cause. Any hint of an unacceptable opinion could result in physical harm or financial ruin.

A similar radical polarization is happening today. In local communities, among old friends and within families, the opportunities for deliberate misunderstandings multiply. Knowing better, people interpret others as myopic and selfish, irrationally committed to ideas that they have basically absorbed through propaganda. Soon it becomes easy not to listen to them, easy to avoid them or perhaps to reject them altogether, to demonize their affiliations and stain them with imputed evil.

“Reason” then becomes what Thomas Hobbes calls: the slave of the passions. Taking a step back, being able to look at situations with objectivity, would make it possible to bring out real causes and real intentions – but who can achieve objectivity when the disagreements are so deep? Those who try to exercise true reason, sweet reason, find themselves in these circumstances despised as weak, whereupon pride might embitter them to rage and hardening of heart. It is almost a truism to say that the issue of abortion is today what slavery was in 1861. The participants of the different camps in the public demonstrations have nothing in common, as is often said, for there can be no fruitful conversation when assumptions about property and human life are discussed. so radically different.

For all abortion advocates, from socialist to libertarian, the body is private property in its most concentrated form. Women can engage in any sexual activity they choose because they own their bodies, but an unexpected baby is a criminal intruder. They want the right to stand their ground and kill the intruder. In contrast, those who oppose abortion understand bodily existence as given, and they believe that life should be governed by openness to God’s will. It’s easy to take a step back and congratulate yourself on having the right opinions, like the Pharisee who compares himself to the publican, but nothing is simple here. Every real situation has more complications and complexities than we care to admit. Most women who abort do so, not out of assertive ideology, but out of desperation. Circumstances have forced them to make terrible choices, and at the crucial moment, they have no hope that the life inside them won’t drag them both to a living hell. And yet the people and places that can and do offer real hope of help, real alternatives, have been attacked as if they exist only to deprive women of their property rights.

In his book on Lincoln and the Civil War, Harry Jaffa writes that “people intoxicated by their own supremacy” come to see constitutional forms as “barriers to their rights.” In short, they “tend to identify these rights with their passions and to oppose the obstacles as if they were obstacles to their rights”. The difficult question we face is political: how long can we maintain our constitutional forms? The even more difficult question, however, is what it means to follow Christ’s law of love. Saint Charles Borromeo, whose Memorial stands today, reminds us to “bear the faults of others at home and elsewhere, as you wish others to bear you”. Specifically, he writes, “Be not easily disposed to judge your neighbor, especially his intentions, but keep your eyes on your own sins and faults. You’d think we could do it on our own, but that’s the sweet reason God had to die to bring us.

The imaginative curator applies the principle of appreciation to the discussion of culture and politics – we approach dialogue with magnanimity rather than mere civility. Will you help us remain a refreshing oasis in the increasingly contentious arena of modern discourse? Please consider donating now.

Image featured is “The Jews took stones to stone Jesus” (between 1886 and 1896) by James Tissot, and is in the public domain, courtesy of Wikimedia Commons.