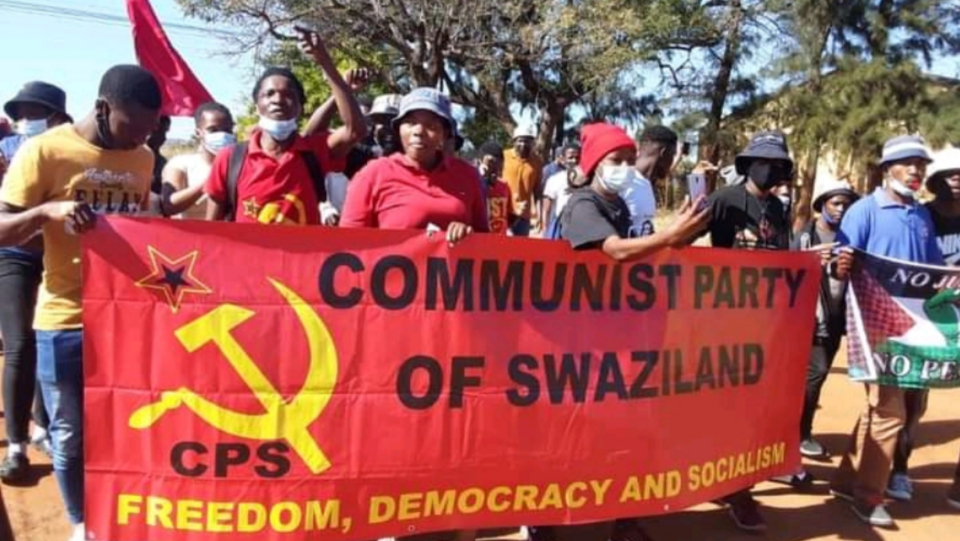 Life expectancy in Swaziland, in southern Africa, is the seventh lowest in the world; its prevalence of HIV/AIDS is the highest in the world, at 26%. Unemployment is 41% and wages for 80% of workers are less than $2 a day. Swaziland is an autocracy ruled by a king, and its social and economic indicators show that the people are suffering under royal rule.

A communist party has existed in Swaziland since 2011, although political parties are illegal there. Many activists, including communists, are forced to live abroad, mainly in South Africa. What follows in this article is information about the Communist Party of Swaziland (CPS), its activities and objectives, aspects of Swazi history and current realities. The PSC urgently needs international solidarity.

Its recent history begins in early May 2021 with the mysterious death, believed to be at the hands of police, of law student Thabani Nkomonye. The police violently interrupted his memorial services.

The National Union of Students mobilized masses of young people and the police repeatedly retaliated with tear gas and bullets. Amid the uprising, the CPS called for the legalization of political parties, the overthrow of the “tinkhundla system” of control by chiefs in rural areas and removal of the king.

In May and June, the National Union of Students organized additional marches; 3,000 students advancing on a police station were met with tear gas and arrests. Anti-government protesters blocked 30,000 garment workers from entering their factories. The government responded by banning demonstrations.

The PSC called for a national conference on democracy during which “a common minimum program could be reached to transform[ing] the state from a monarchy to a republic. Due to government repression of a divisive opposition, no conference materialized. Writing a year later, analyst Joseph Mullen explains:

“At this time…the anti-monarchy forces were themselves deeply divided. While the CPS represented the radical force pushing for the abolition of the monarchy and the prosecution of the king, some opposition forces expressed their willingness to settle for a constitutional monarchy with an elected government…. They gave too much power to bourgeois forces, which simply sought to reform the monarchy.

National unrest returned nearly a year later as opposition groups prepared for the first anniversary of the massacre. The CPS, playing a leading role, was targeted early on. Police captured and tortured member Bongi Nkumbula on March 23. On July 13, they again surrounded and approached his house, but he escaped.

In cooperation with the People’s United Democratic Movement (PUDEMO) and the Multiparty Forum, “a platform of political parties, trade unions, civil society and other groups”, the CPS organized vigils, erected barricades and called on schools and businesses to close on June 29, the anniversary day.

The anniversary passed without killings, as was the case with an earlier period of unrest related to the party experience. In 2011, days of anti-government agitation by students, unions and democratic organizations preceded the fateful day of April 12. It was the day in 1973 when King Sobhuza II, father of the current king, banned political parties and abrogated the constitution the British colonial power had granted in 1968. He subsequently ruled by decree. The CPS has chosen April 11, 2011 as the date to announce its presence in Swaziland.

King Sobhuza II ruled from 1921 until his death in 1982. His reign is the longest of any monarch in human history. On becoming king in 1986, his son, Mswati III, restored parliament. His government designed a constitution that came into effect in 2006 and is ongoing. It gives the king the power to appoint the prime minister, the cabinet, all judges, two-thirds of the members of the upper house and 12% of the members of the lower house. Other lawmakers must be approved by tribal chiefs, who are themselves appointed by the king. A tough law on the suppression of terrorism came into force in 2008.

A writer in 2011 summarizes: The Swazi monarchy “crushed the ambitions of all Swazis, [except for] a small parasitic elite based within the monarchy. The ambitions of the middle classes were reduced by banning political parties and those of the working classes by suppressing the labor movement. The monarchy also tightened its grip on power… by controlling mining royalties, businesses and land administration.

According to MRonline.org, “The Royal Family receives a 25% cut on all mining transactions…and as of 2016 has a budget of $69.8 million. The king, Mswati, has a net worth of $200 million and he controls a trust worth $10 billion.

The monarchy of Swaziland enjoyed absolute power for centuries, even during the period of European colonial rule in the late 19th century. A British commissioner ruled Swaziland from 1902 until Swazi independence in 1968. Even so, the monarchy exercised full control over 33% of Swaziland known as the ‘Native Reserve’. On April 19, 2018, the 50th anniversary of Swaziland’s independence, King Mswati III renamed Swaziland. Now officially it is “the Kingdom of Eswatini”.

The People’s United Democratic Movement (PUDEMO), formed in 1983 and a member of the Socialist International, plays a major role in Swazi opposition politics. The others are: Assembly of Political Parties, Ngwane National Liberation Congress, Swaziland Economic Freedom Fighters and Swaziland Liberation Movement.

The United States, Taiwan, and a few other nations provide the monarchy with military supplies. Two helicopters supplied by Taiwan and built by the United States were used to fire on protesters in June 2021. The United States welcomes 15 Swazi police officers each year to its International Law Enforcement Academy in Botswana and trains security personnel in the States -United. The US-based World Bank and Taiwan have provided Swaziland with generous loans. Swaziland is the only African country to diplomatically recognize Taiwan.

The South African government loaned the cash-strapped monarchy €355 million in 2011 and has a supportive relationship. Swaziland relies on South Africa for 85% of its imports and 60% of its exports. The Congress of South African Trade Unions and the Communist Party of South Africa have expressed support for democracy efforts in Swaziland.

The goals and strategies of the CPS are evident in the statement the party issued when it first emerged in Swaziland in 2011. These sections are telling:

“We join Swaziland’s mass democratic movement for change and commit to fully support the building of this movement, led by PUDEMO, to bring about a national democratic revolution in Swaziland…. [But] We do not want to see monarchical autocracy reformed or clothed in democratic trappings to appease the liberal sensibilities of any interest group or the imperialist international community.

The CPS calls for “an end to monarchical autocracy and the transfer of much of its wealth to the immediate tasks of fighting disease and the worst aspects of poverty (such as access to water and sanitation) [and] forfeiture of all Crown assets.

Also: the “demand for democracy [as] a first step in an ongoing struggle to set our country on a totally different path of development towards meeting all the needs of our people and creating a socialist system.

In a statement on Solidnet.org on July 6, 2021, the CPS urged communist parties around the world to pay attention to “news of what is happening in our country, to pressure the authorities of your respective countries to they condemn the Mswati regime, … for pressuring South Africa … to take more decisive positions against the lack of democracy and human rights in Swaziland.

Our final focus is on the youth of Swaziland. They are many. Out of 1.18 million Swazis, 36.6% are under the age of 15. Young people played an important role in opposing the regime, especially militant youth organizations like the National Union of Students and the Swaziland Youth Congress, the youth group of PUDEMO.

A report published on the CPS website sheds light on the plight of young people. Students had refused to take university exams. They claimed that they could not study due to economic difficulties. University authorities postponed the exams, but backtracked. Students protested, police attacked, and students took exams on July 4. Then the student Sphelele returned to his room and committed suicide. The report notes that eight Swazi university students recently committed suicide.

The CPS reporter quotes the Condition of the working class in England (1845), written by “Comrade Frederick Engels”. He quotes :

“[O]Since a system has placed the working class in conditions where it can neither maintain health nor live long, and thus gradually sap the life force of the working class, little by little, and thus cast it to the grave before the time, this is nothing but social murder.

Writing Secrets and Other Tools of the Trade | Latest India News