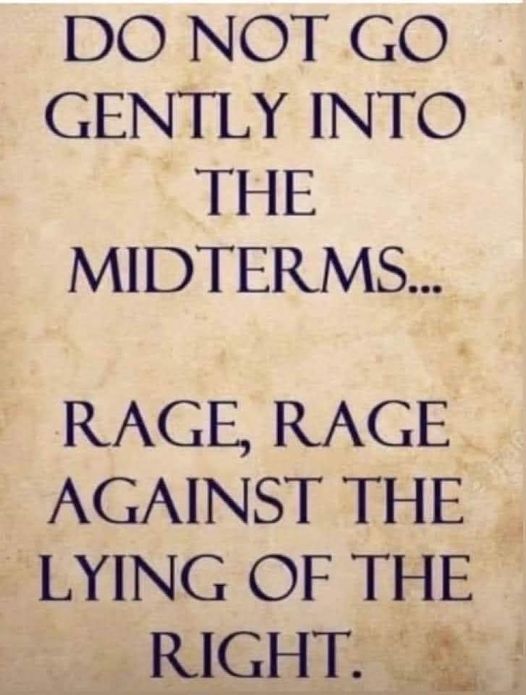 When I woke up today, I needed motivation to do everything I could in the next few days…until mid-term exams. I had thought our current crop of Republicans was the worst I had ever seen in my life…but it made me feel better knowing that they were always reprehensible. I also needed to read what some of our Democratic leaders have said in the past, the qualities we believe are important in leaders, and finally, I needed to smile, so I searched for anti-Republican quotes /anti-conservatives. Who knew former President Harry S. Truman had a biting sense of humor?

When there is a Republican majority

“There is nothing on the record of the past two years when both houses of Congress have been controlled by the Republican Party that can lead anyone to believe that these promises will be kept in the future. They are toeing the Hitler line – whatever no matter how big the lie, repeat it often enough and the masses will consider it the truth.
– John F. Kennedy

“The Republicans approve of the American farmer, but they are ready to help him go bankrupt. They represent four squares for the American house – but not for housing. They are strong for work, but they are stronger for restricting workers’ rights. They are in favor of the minimum wage – the lower the minimum wage, the better. They approve of educational opportunities for all, but they will not spend money on teachers or on schools. They believe that modern medical care and hospitals are suitable for those who can afford it. They see electric power as a great blessing, but only when private power companies get their rake. They think the American standard of living is a good thing, as long as it doesn’t extend to everyone. And they admire the United States government so much that they would like to buy it.
-Harry S. Truman

“Take my word for it, if and when these preachers take over the Republican Party, and they sure are trying to do it, it’s gonna be a terrible fucking problem.” Frankly, these people scare me. Politics and government require compromise. But these Christians believe they are acting in the name of God, so they cannot and will not compromise. I know, I tried to take care of them.
-Barry Goldwater

“When a political movement loses all sense of self and lacks a unifying theory of government, it ceases to function as a collective rooted in thought and becomes more like fans of a sports team.”
-Stuart Stevens, It Was All a Lie: How the Republican Party Became Donald Trump

“American history has never been about easy things. It was about rising up when the time is hard. About the rejection of panicked division for deliberate unity. About see a mountaintop from the deepest valley. That’s why we remember that some of the most famous words ever spoken by an American came from a president who took office in a time of trouble: “The only thing we need to fear is fear itself.
-Barack Obama

“We had to fight against the old enemies of peace: commercial and financial monopoly, speculation, irresponsible banking, class antagonism, sectionalism, war profiteers.

Never before in all of our history have these forces been so united against one candidate as they are today. They are unanimous in their hatred towards me and I salute their hatred.
-Franklin D. Roosevelt

“Of course, we cannot expect every leader to possess the wisdom of Lincoln or the magnanimity of Mandela. But when we think about what questions might be most useful to ask, perhaps we should start by discerning what our potential leaders think are worth hearing.

Do they address our biases by suggesting that we treat people outside of our ethnicity, race, creed or party as unworthy of dignity and respect?

Do they want us to harbor our anger towards those we believe have wronged us, scrub away our grievances, and seek revenge?

Do they make us despise our governmental institutions and the electoral process?

Are they seeking to destroy our trust in essential contributors to democracy, such as an independent press and a professional judiciary?

Do they exploit the symbols of patriotism, the flag, the oath in a conscious effort to pit us against each other?

If they lose at the polls, will they accept the verdict or insist without proof that they have won?

Do they go beyond questions about our votes to boast of their ability to solve all problems, calm all anxieties and satisfy all desires?

Do they solicit our cheers by speaking casually and with inflated machismo about using violence to drive out enemies?

Do they echo Musolini’s attitude: “The crowd doesn’t have to know, it just has to believe and let itself be shaped. »?

Or do they invite us to join them in building and maintaining a healthy center for our society, a place where rights and duties are fairly distributed, the social contract is honored and everyone has room to dream and grow.

The answers to these questions will not tell us whether a potential leader is left or right, conservative or liberal, or, in the American context, Democrat or Republican. However, they will tell us a lot of things we need to know about those who want to rule us, and a lot about ourselves as well.

For those who cherish freedom, the answers will provide grounds for comfort or a warning that we dare not ignore.
―Madeleine K. Albright, Fascism: a warning

“Hope is not blind optimism. This is not to ignore the enormity of the task ahead of us or the obstacles that stand in our way. It’s not about sitting on the sidelines or ducking out of a fight. Hope is that thing inside of us that insists, despite all evidence to the contrary, that something better awaits us if we have the courage to reach for it, work for it, and fight. for it. Hope is the conviction that destiny will not be written for us, but by us, by men and women who are not content to be satisfied with the world as it is, who have the courage to remake the world as it should be.
-Barack Obama

“If by ‘liberal’ they mean someone who looks ahead and not behind, someone who welcomes new ideas without rigid reactions, someone who cares about people’s well-being – their health, their housing, their schools, their jobs, their civil rights and their civil liberties – someone who believes that we can break the deadlock and suspicion that traps us in our overseas policies, if that’s what they mean by “liberal,” so I am proud to say that I am a “liberal.”
– John F. Kennedy, Profiles of Courage

“Suppose you are an idiot. And suppose you’re a Republican. But I repeat myself.
-Harry S. Truman

“Of course, I want to save the Republic from Trump and Trumpism, but I don’t mind telling members of my party and my movement to fuck off along the way.”

“A curator is someone who changes nothing and consults his
grandmother in case of doubt.”
―Woodrow Wilson

“I’m a registered Republican, I only appear liberal because I believe hurricanes are caused by high barometric pressure, not gay marriage.”
-Aaron Sorkin

Norm Orenstein, writing for Atlantic. “If Republicans take control of the House of Representatives, the country will face a series of fundamental challenges far greater than any we have encountered in any modern period of divided government, including a direct and palpable threat of default and government shutdown. The Republican majority will be more radical, reckless and willing to use nuclear options to achieve its goals than any of its predecessors, and its leaders, starting with McCarthy, will be either compliant or too weak to avert catastrophe.