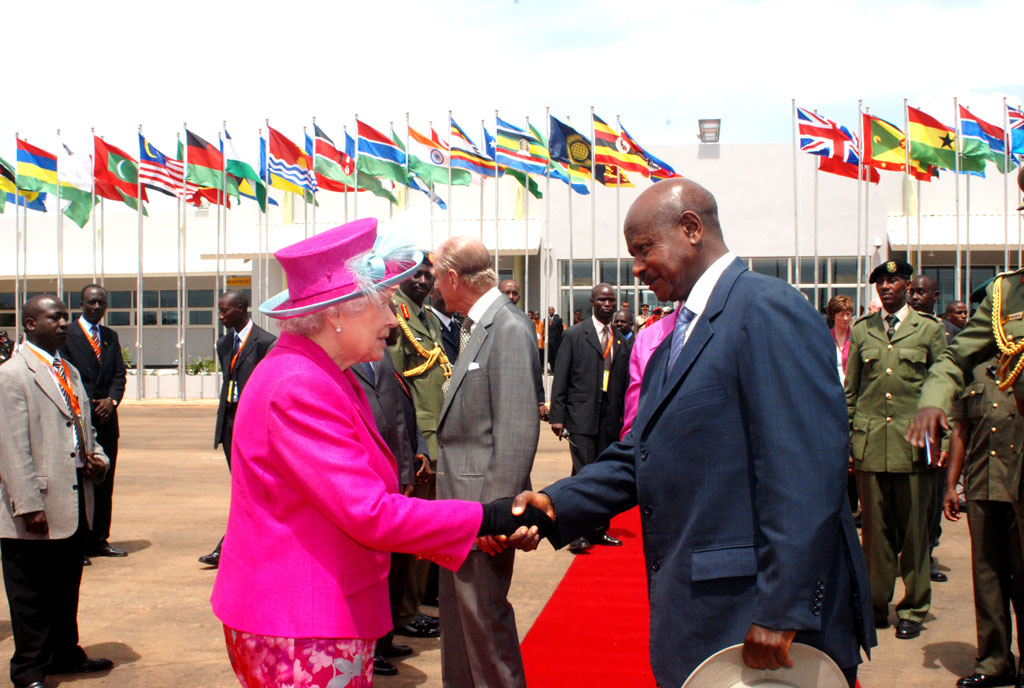 “Your Excellency, President Museveni and Mrs. Museveni, Right Honorable President, Honorable Members, Ladies and Gentlemen; Prince Philip and I have fond memories of our last visit to Uganda together. For many years, your country has made considerable progress, despite periods of adversity. I think what has helped sustain modern Uganda is the attribute that was so evident in 1954, and still today, in the generous manner in which we were received; the great warmth and kindness of its inhabitants. We are delighted to be here once again. The Queen addresses the Ugandan Parliament on November 22, 2007.

“One hundred years ago Sir Winston Churchill, who much later became my first Prime Minister, made a famous visit to Uganda, which he was moved to call the ‘Pearl of Africa’. other visitors to this country over the years, he was struck by how truly gifted Uganda was by nature.Sir Winston had visited Munyonyo, then just a jetty and some sheds, where most appropriate, the The current British Prime Minister will join his fellow Commonwealth Heads of Government this weekend.The Queen addresses the Ugandan Parliament on November 22, 2007.

“In the years that have passed since Prince Philip and I were last here, one particular change has come to mark Uganda and indeed much of Africa. HIV/AIDS has touched the lives of so many Ugandans. It is sometimes difficult, when the grief associated with this disease is so deep, to avoid a feeling of hopelessness. Yet, there are more and more people and of organizations whose work gives real hope.The Queen addresses the Ugandan Parliament on 22 November 2007.

“When I first spoke at a Commonwealth Heads of Government Meeting 30 years ago, Papua New Guinea and Seychelles were welcomed as its 32nd and 33rd members. Since then, our association has continued to attract new members while responding to the great concerns and concerns of our time.Uganda’s rich history is longer.Humanity has been present here since as far back as our archeology and history allow us to. And just as the people and ideas that were born in this part of Africa have spread to other parts of the globe, the rest of the world has come to touch the lives of Ugandans. This week, he comes here to Kampala in the form of the Commonwealth.The Queen delivers a speech at the opening ceremony of Chogm 2007 on November 23, 2007.

“President Museveni, you know the Ugandan proverb that goes: ‘Those who walk together warn each other’. In its sense of unity giving strength, it could just as well be a Commonwealth proverb as a Ugandan proverb. Over the next two days, I wish you and your fellow leaders a continued Commonwealth tradition of strength in our diversity, as well as strength in our unity. The Queen delivers a speech at the opening ceremony of Chogm 2007 on November 23, 2007.

“Mr. President Museveni, Mr. Secretary General, Ladies and Gentlemen, I am very grateful to you for your kind gifts to both of us and for the warm welcome we received. As Head of the Commonwealth, I am delighted to welcome you all here this evening (for what I hope will be a pleasant break from your schedule). I am very happy to be with you again and I wish you every success in your deliberations. A Queen’s Speech at the 2007 Chogm Dinner in Kampala on November 23, 2007.