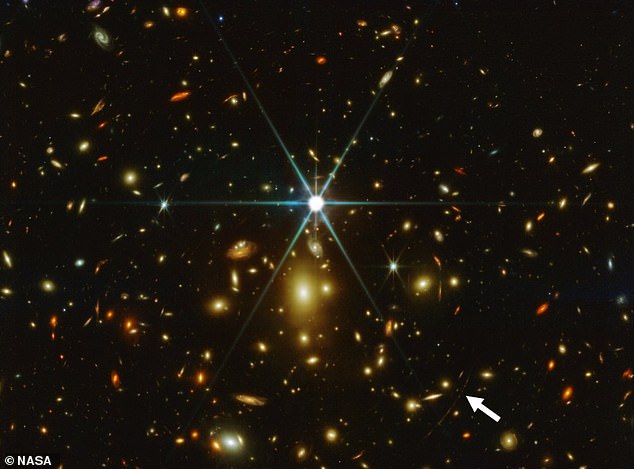 Since it was first proposed in 1927, the Big Bang theory has remained the primary explanation for how the universe began.

The theory suggests that the universe began as a single point, which swelled and stretched over the next 13.8 billion years to become the ever-expanding cosmos we know today.

When NASA launched its James Webb Space Telescope into orbit in December, it was hoped the $10 billion space telescope could help unravel the mystery of what happened right after the Big Bang.

This week, claims have spread on social media that James Webb’s photos are debunking the Big Bang theory and inspiring “panic among cosmologists”.

However, these claims are simply not true and are based on quotes and misinterpreted data.

This week, claims have spread on social media that James Webb’s photos are debunking the Big Bang theory and inspiring “panic among cosmologists”. However, these claims are simply not true and are based on quotes and misinterpreted data.

When NASA launched its James Webb Space Telescope into orbit in December, it was hoped the $10 billion space telescope could help unravel the mystery of what happened right after the Big Bang.

The Big Bang theory is the primary explanation for how the universe began.

Simply put, it says that the universe as we know it began with an infinitely hot, dense single point that swelled and stretched – first at unimaginable speeds, then at a more measurable rate – over the course of from the next 13.8 billion years to the ever-expanding cosmos. that we know today.

While the majority of the astronomical community accepts the theory, some theorists have alternative explanations besides the Big Bang, such as eternal inflation or an oscillating universe.

The claims stem from an article published earlier this month on The Institute of Art and Ideas written by Eric Leaner – a staunch disbeliever of the Big Bang theory.

His article claims that the Big Bang did not happen and cites photos taken by James Webb as proof.

However, Leaner misinterpreted early data from James Webb to suggest that astronomers fear the Big Bang theory is incorrect.

Leaner refers to an article that begins with “Panic! – which he calls a “frank exclamation”.

But reading the rest of the title, you’ll find that the use of ‘Panic!’ was followed by ‘At the Disks’ – a clever pun on the band Panic! At The Disco, rather than an exclamation of concern.

Meanwhile, Leaner also misuses a quote from Allison Kirkpatrick, an astronomer at the University of Kansas.

“Right now I find myself lying awake at three in the morning wondering if everything I did was wrong,” he said, quoting Kirkpatrick.

This quote is from a Nature news article published on July 27, but does not refer directly to the Big Bang theory.

Instead, Kirkpatrick was talking about the first data coming from James Webb about the early evolution of the universe.

The Big Bang theory is a cosmological model used to describe the beginning and evolution of our universe, based on observations – including cosmic background radiation (pictured), which resembles a fossil of radiation emitted at the start of the universe, when it was hot and dense

Kirkpatrick herself has repeatedly stated that her quotes were misused in the article and maintains that she believes in the Big Bang theory.

‘It’s wild. Especially because I never said anything like that! she tweeted of her account, which she renamed “Allison, the Big Bang has happened to Kirkpatrick”.

One of the main reasons why the Big Bang is still the main theory about the beginnings of our universe is because of the cosmic microwave background (CMB) – the radiation rest of the Big Bang.

Scientists were able to “see” this radiation with satellites, including NASA’s Cosmic Background Explorer, which operated from 1989 to 1996.

Although Lerner has offered other explanations for the CMB, these have all been refuted in the past.

James Webb is not designed to see the CMB, but rather to see a period in the history of the universe that has never been seen before.

In a question-and-answer session, Dr John Mather, Nobel Laureate and Lead Scientist of the James Webb Space Telescope Project, explained: “Specifically, we want to see the first objects that formed when the universe s cooled after the Big Bang.

“We think the tiny temperature ripples they observed were the seeds that eventually grew into galaxies.

“We don’t know exactly when the universe created the first stars and galaxies – or how for that matter. That’s what we’re building JWST to help answer.

The James Webb Telescope has been described as a “time machine” that could help unlock the secrets of our universe.

The telescope will be used to look back at the first galaxies born in the early universe more than 13.5 billion years ago, and observe the sources of stars, exoplanets and even moons and planets in our solar system.

The vast telescope, which has already cost more than $7bn (£5bn), is seen as the successor to the orbiting Hubble Space Telescope

The James Webb Telescope and most of its instruments have an operating temperature of around 40 Kelvin – about minus 387 Fahrenheit (minus 233 Celsius).

It is the largest and most powerful orbiting space telescope in the world, capable of observing 100 to 200 million years after the Big Bang.

The orbiting infrared observatory is designed to be about 100 times more powerful than its predecessor, the Hubble Space Telescope.

NASA likes to think of James Webb as a successor to Hubble rather than a replacement, as the two will be working in tandem for some time.

The Hubble Telescope was launched on April 24, 1990 via Space Shuttle Discovery from Kennedy Space Center in Florida.