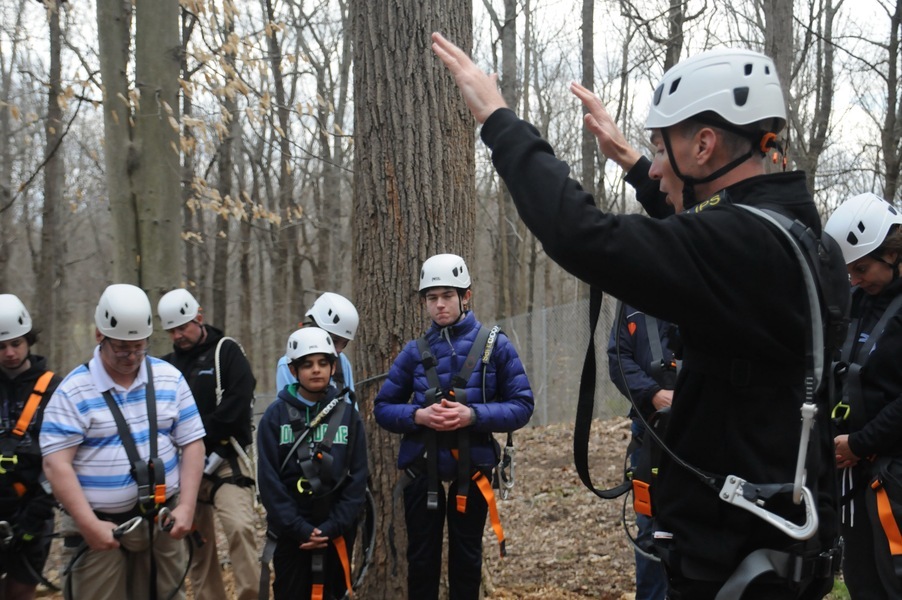 SPARKS – If you see a boat hanging high in the woods surrounding the Monsignor O’Dwyer retirement home in northern Baltimore County, it’s not due to a freak weather event.

The boat is intentionally part of the new ropes challenge course at the youth retreat center, hoping to inspire participants to become “fishers of men” by evangelizing others.

Auxiliary Bishop Adam J. Parker blessed the new course April 3 and performed one of the first runs on the 750-foot zipline, one of three ziplines on the property; the other two lines run 300 feet each. The day also included a dozen students and faculty from Mount de Sales Academy in Catonsville and a few others putting the course to the test for the first time.

Phil Howard, director of the O’Dwyer retirement home, said in remarks before the blessing that Mount St. Joseph was chosen because it was the first school to use the facility when it opened in October 1963 , and has come for retreats every year since , including during the coronavirus pandemic when most other schools canceled off-campus activities.

John Smyth, chairman of the retirement home’s board, said the project took two years in the planning, with nearly a year to get building permits. The high and low ropes structure is 30 feet high. On the support pillars along the way, small blue post boxes are attached so retreat leaders can leave inspirational quotes or Bible passages for retreatants to find while doing the activity.

O’Dwyer – named after its founder, pioneering youth minister Monsignor Clare O’Dwyer – provides space for retreats, parish and school meetings and other gatherings. It will offer five summer day camps for incoming students in grades one through five this summer between June and August.

The course and ziplines are on the back nine acres of the property; the center also has an additional nine acres that include a retirement home, living spaces for overnight retreats, a cottage, plenty of room to walk around, a swimming pool, and outdoor meeting space.

The site includes the Mass Cross that Saint John Paul II celebrated at Oriole Park in Camden Yards in 1995. A second phase of the ‘Cords and Rosaries Plan’ calls for the development of a Rosary Garden and ‘a prayer space around the huge, white cross,’ says Smyth.

He noted that the entire structure is built around a Catholic theme, while emphasizing courage, confidence and overcoming obstacles in the practice of faith. The council realized a few years ago that it was losing some schools and organizations going elsewhere for retreats because they had more outdoor activities and more challenging options.

The project is built with safety in mind, including cables on which climbers hook a special device that allows them to stay attached to the course, even if they fall. Each participant also wears a helmet and a harness.

Equipped with a climbing harness and helmet as the course blesses, Bishop Parker prayed for the safety of all who use it. “May the trust we build in each other reflect the trust we have in you, our Savior, our Creator. … May we be willing, after meeting here, to go out to make disciples and make your name known to the world.

The first adventurers were put to the test by Emily Balnkenship, an outside provider who is a treetop course trainer. Howard and O’Dwyer, Facilities Manager, John McCarty, were certified as ropes course trainers and facilitators at the end of March. “We climbed over, under and through everything. I could barely move the next day,” Howard said.

Clay Bonham, director of campus ministry at Mount St. Joseph, enjoyed the new course during his dedication day. As he waited at the end of the long zipline, he said the school hopes to engage its second-grade class in a retreat that understands new challenges. He plans to take the course to a group of aspiring senior leaders in June.

“I love that you can bond courage in faith overcoming obstacles. It has a lot of potential,” he said.

The path leading to the ropes course and zip lines and the space below is covered with a soft, thick mulch bed. Ten dump truck loads – 250 cubic yards – were delivered and dispatched just days before the blessing and opening.

The project cost $200,000, according to Howard, with donations from the Knott Foundation and other private donors.