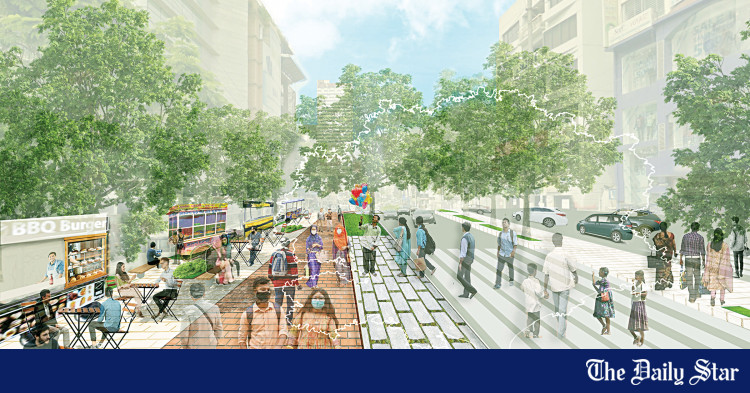 Metrophilia: how to love Dhaka

If you want to fall in love with the city, walk. This simple aphorism opens up a full discourse on how we can make our cities livable and civic, and how we might live together as a collective. You have to love a city to develop it, here is perhaps a second aphorism. A better philosophy of urban development – ​​which The Daily Star asked me to write about – should be based on ambulatory living, living and experiencing the city by walking. By walking, we are with others and we participate in what can be described as the public domain.

In our cultural scheme, we prioritize the circulation of motorized vehicles and place the pedestrian at the lowest level of all political decisions and infrastructure planning. PHOTO: AHNAF TAHSIN RAFI

In our cultural scheme, we prioritize the circulation of motorized vehicles and place the pedestrian at the lowest level of all political decisions and infrastructure planning. PHOTO: AHNAF TAHSIN RAFI

The city has become incredibly complex and impenetrable, but that’s also a beautiful thing, as the former mayor of model Brazilian city Curitiba always reminds me. As the “greatest collective dream”, implores Lerner, the city is not a problem, but the solution to collective existence.

The French writer Charles Baudelaire celebrated the ritual of walking around the city in the form of the “flaneur”. A difficult word to translate from French, as it could mean a flâneur as they say in Dhaka, but in Baudelaire’s sense, a flâneur is “a connoisseur of the street”, an alert investigator who, wandering the streets, picks up sights, sounds and spirit of place. Inspired by city life, Baudelaire’s flâneur can become a productive person. Architect Louis Kahn imagined the street as a place of infinite wonder where a child walking one day decides what he wants to do with his life.

In the 1960s, the Situationists, the avant-garde group based in Paris, came up with the practice of drifting which consisted of traversing the terrain of a city to randomly discover situations in which to implement a work of art. unprecedented political art. Psychogeography, the practice of walking and mapping the city, developed from there. In a moving essay titled “Dictionary of Streets”, published in his book Starting with My Streets, Polish writer and Nobel laureate Czeslaw Milosz intersects psychological geography with the lay of the streets of his hometown Wilno (Vilnius) so that the “aura of the place” can be recorded.

Writing in his book The New York Nobody Knows, sociology professor William Helmreich mentions walking almost every street in New York City, which would be around 6,000 miles. “I love reading about the city, living the city, walking in the city.” Helmreich confesses in a New Yorker article. “I did it in the morning. I did it in the evening. I did it on the weekend. I did it in the rain, in the snow, in the summer. It was about thirty-five, forty miles a week, a hundred and twenty a month, fifteen hundred a year.” I know the architect Salauddin Ahmed who leaves very early in the morning to walk the streets of Dhaka and document his life-world.

A good city is above all a city where you can walk. It is an axiomatic truth propagated by fervent lovers of the city, from Baudelaire to urban biologist-planner Patrick Geddes, and from urban activist Jane Jacobs to sociologist Henri Lefebvre. Our most intimate engagement with the city is walking. I call this phenomenon “metrophilia”. As a notion, it is not found in the training of planners and architects in the country, and certainly not written into the thick policy books produced for planning cities.

A walkable environment should be the number one priority in any transportation or urban design. In our cultural scheme, we prioritize the circulation of motorized vehicles and place the pedestrian at the lowest level of all political decisions and infrastructure planning. We forget that among people on the move in the city, 40% of them walk. Where once the pedestrian ruled and where the city was a place for strolling and strolling, and benefited from its sidewalks, its banks and its public spaces, the automobile now dictates the term for the organization of the city. We build roads for cars and direct all major investments – elevated roads, flyovers, ever-wider roads and U-loops – towards the promise of uninterrupted vehicle movement, while we corner the pedestrian ever closer to the edge narrow of the road.

A good city is above all a pedestrian city. PHOTO: ARIF HOSSAIN

A good city is above all a pedestrian city. PHOTO: ARIF HOSSAIN

And that is why the Dhaka trails remain the saddest configuration ever suggested for human adaptation. Built primarily to cover sewers, most trails are ironically impassable: they’re split into segments, they’re obscenely high (sometimes requiring steps to get up!), and when they do exist, they’re often taken in charging by electrical transformers, bus ticket vendors and police boxes. There, walkers flip over each other and jump across a motley space no more than 4 feet wide.

No wonder people walk on vehicular roads even at the risk of being run over. With the book “Designing Dhaka”, published in 2012, we were perhaps the first to worry about the poor and shabby sidewalks of Dhaka. We even joked: a trail is exactly that: a wide trail!

Despite heavy investments on the road, we have failed to give it a civic form and standard. Dhaka still has a rudimentary road and transport system. Busy, congested and chaotic, the roads of Dhaka look like scenes from a disaster movie. If after thousands of years of human civilization we crawl our roads in our vehicles at 7 km per hour – the average speed of a motorized vehicle on Dhaka’s roads – and some of us who walk meet untimely deaths by getting run over, there’s something wrong with the development picture.

If we want this megacity of 20 million to be the shining capital of a developed nation, marching forward with its flag of ever-increasing GDP, we should start with the city’s roads. Economic progress must match the quality of urban and physical spaces in cities.

I have pointed out elsewhere that the road in the city is really a public landscape, a space shared by both motor vehicles and humans, one is a mechanized contraption moving with speed, and the other a vulnerable living thing that breathes. The road is not simply a conduit for motor vehicle traffic; it includes passage, movement and crossing for pedestrians. In Dhaka, we forget that the pedestrian is a vulnerable human being, whose stature of one meter seventy provides the fundamental scale and the reference of all spaces.

The real problem is that the city of Dhaka, as it is, resists walking, hence our ambivalence about the city itself. Dhaka’s middle, upper middle and upper (MUMU) classes don’t work! Finding walking and thus becoming a discomfort to the public, they are happily settled in their houses/apartments. Removed from the public domain, they travel in their car capsules to go from one space capsule (apartment) to another (apartment or work). With the MUMU class deciding the shape of the city (they influence most political decisions in one way or another) and despising the “public”, at no time will we expect an improvement in the public domain and public spaces soon.

The Mass Rapid Transit (MRT) is a major public-purpose undertaking that is slow to come but certainly crucial to improving the city’s quality of life. We are all looking forward to this. With all the construction going on around the MRT, we haven’t thought much about walking yet as it is essential to the success of any rapid transit. All major cities with efficient MRTs – Tokyo, Moscow, Manhattan, Hong Kong – are extremely walkable. What is needed with the transit infrastructure plan is a ‘walking map’ for Dhaka – the transit-focused metropolitan scale must match the walkable local scale.

In times of Covid, the importance of open public spaces and recognition of the local has become an absolute public health necessity. Almost every conscientious city in the world has focused its attention on the importance of public spaces and the importance of walkable urban centers. Many cities in the United States have adopted what are known as “open, slow, or shared” streets in which the presence of the automobile has been reduced or controlled to provide open-air mini-public spaces. A new call to action for European cities is the “fifteen-minute city”, popularized by Paris Mayor Anne Hidalgo, in which most people’s needs will be met in an area that can be reached on foot in fifteen minutes. By advancing the idea of ​​hyper-local and allowing citizens to use the streets in their own way, Stockholm is testing the idea of ​​a “one-minute city”.

Once Dhaka was a city of “mosques and bazaars”, now it is a city of walls and borders. PICTURED: SHAFIQUL ISLAM

Once Dhaka was a city of “mosques and bazaars”, now it is a city of walls and borders. PICTURED: SHAFIQUL ISLAM