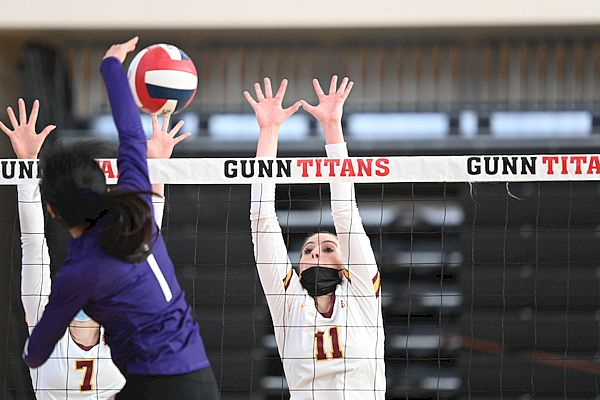 A loss brought the team together and a mantra kept them together. There was also a bit of fun and eccentricity.

A desire to play all for one and one for all equates to a successful run through the Division I women’s volleyball tournament in the center section of the coast for Menlo-Atherton.

â€œWe played for our seniors, the crowd and the school,â€ MA junior libero Clara Cronin said. â€œSeniors are our rock. They are always there for us. They are amazing. When the football team shows its support, it’s inspiring. We love when they come. It’s so much fun. “

“Seniors are beautiful people who support us on a daily basis,” said junior Rebecca Schulman. â€œThey give us a good spirit. We love to play with them.

The Bears (19-17) stumbled quite a bit with a monster schedule (they were 0-7 against teams playing in the open division) but they never fell.

â€œI said they could get here from the start,â€ said MA coach Bryant Tran. â€œThey looked at me like I was a little crazy. They were still learning before they realized they could still play like this.

MA made no apologies this season, they just kept playing. The Bears, however, were shocked with complacency in a previously winless Peninsula Athletic League loss to San Mateo.

â€œAfter that, we realized that we had to keep fighting if we wanted to accomplish anything,â€ Schulman said. “We had to want him more than the other team.”

Valley Christian graduate assistant coach Keilani Mayo borrowed a saying from her college days at Westmont College to remember to keep their intensity: “All throttle, no brakes.”

â€œIt told us to keep moving forward,â€ Cronin said. â€œWe couldn’t let go. Once they told us we could play in CCS, it was like starting over.

MA ran the gauntlet, playing and beating four teams in the Santa Clara Valley Athletic League, including the # 2, # 3 and # 4 ranked teams in order to lift the championship plate.

â€œThe record of wins and losses doesn’t matter,â€ Cronin said. â€œIt all comes down to where we are now. “

â€œSeniors mean a lot to us,â€ Tran said. “They’ve been through a lot in the past two years and they continue to contribute to games and training.”

Bridget Gray is the only senior among the four team captains in what Tran calls “a culture of trust”.

Gray, Cronin, Schulman, and Anna Ryan are each responsible for part of MA’s game plan, inserting their own ideas on how to attack, defend, and even know what to say as a team.

Schulman and Cronin have developed their own way of keeping everyone motivated. They call it â€œa little handshake,â€ but they must have spent a lot of time choreographing the routine performed just before the start of each set.

It starts with a handshake but ends with a hug and that’s something they’ve been doing for most of the season.

â€œWe do it to stay focused and give ourselves inspirational quotes,â€ Schulman said.

MA fell 20-14 behind in the second set, forcing Tran to call the time. The Bears returned to the field and went on an 8-2 streak, with three kills each from Ryan and senior Eliza Boyle, tying the set at 22.

Monta Vista took the next two points on a kill and a serve ace to reach match point, when he never came. The Bears scored the last four points, including a block from seniors Summer Prescott and Gray and a Prescott kill to end the game.

The Matadors (15-12) completely dominated the third set, scoring 11 points on MA errors while committing only two.

Monta Vista was still in the lead at 21-19 before juniors Christina Kerr and Ryan put the Bears in the lead to stay. Some drama remained as the Matadors were tied at 24 before Gray scored on a kill to put MA on match point. A typo from Monta Vista gave the Bears the win.

MA qualifies for the northern state regional tournament which begins on Tuesday. Sowing will take place on Sunday.

“They are a game problem for us and we did a good job with that in the first set,” said Menlo coach Tony Holland. â€œWe’ll go back to the gym, find out who we’re playing and get to work. I imagine we will be in the Open Division and I hope our work gives us at least one home game.

At least the Knights (28-6) can enjoy their team banquet before then.

Menlo had a few chances to win the first set before Mitty finally landed the winning shot.

â€œIt was huge,â€ said Mitty’s coach Jon Wallace. â€œThey had a lot of confidence and if we had lost this set it could have been difficult. I don’t think they lost confidence, but I think we slowed it down a bit.

Mitty won her first CCS title since 2017. The Monarchs have won six consecutive section titles between 2012-17 and each time have won the state title.

Mitty has won 22 CCS titles and 17 State titles in total.

Menlo senior away striker Sharon Nejad recorded nine of her team-high 18 kills in the first set.

Hanna Hoffman delivered a cross kill and Simone Adam served an ace for a 25-24 lead. The teams were tied at 26-28, when Mitty called the game out with a serve error and Kendra MacDonald’s kill and ace.

Mitty led from the start of the third set. The Knights came close to two on kills from Hoffman and Nejad and a block from Nejad, but couldn’t get past Mitty.