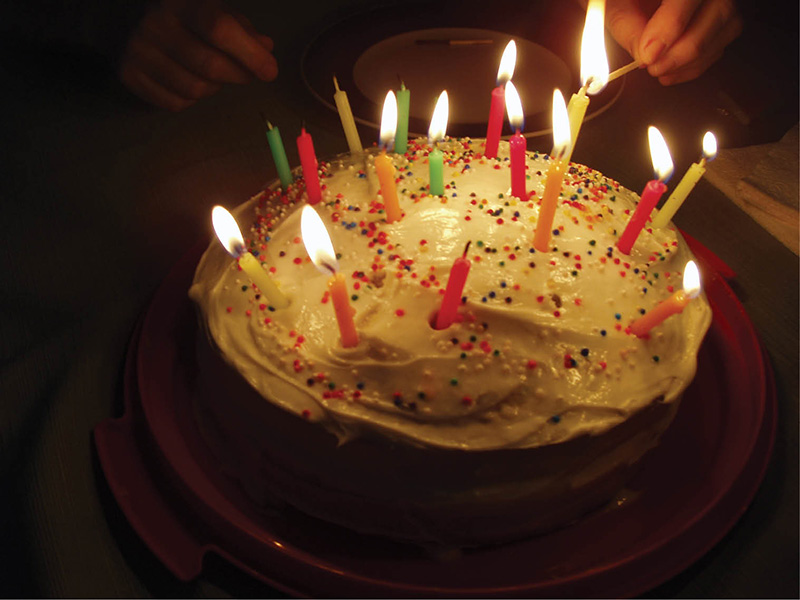 It brought a smile to many of us uninvolved observers when a honking horde in decorated cars threw a drive-in birthday party at a neighborhood home. It lifts spirits, even for strangers, to witness the happiness of a surprised winner, exuberant spirits (as long as there are no fireworks), and a display of love which took a lot of planning and effort.

Try not to focus on the necessity behind this new addition to our culture and just enjoy a little public sharing of a family experience like the good old days of singing in a restaurant when the gang at the next table sang “Happy Birthday”.

Hearing about an expanded version of a family birthday party planned for this week touches my heart. Everyone knows that the strong man, head of the family, faithful husband, son, dad and grandfather won’t be around for another birthday. Everyone wants the chance to say “I love you” and see them smile. They want to have a happy ending after his months of hard battle with cancer.

Thinking of the sheer energy of people hosting a celebration in the midst of disastrous chapters of deteriorating health, or at a time of distress in the face of life’s changes and challenges… well, there’s no no other description than this overused and misused word: impressive.

Meanwhile, performing at another family close to my heart is the most typical subdued twist on the special day. It’s another birthday this week. The celebrant is of an age that causes a loving child to see each birthday as a celebration-worthy milestone. But others balked at the idea for a variety of reasons ranging from COVID caution to aversion to ordering performance.

“I love parties. If I had my druthers, I’d love a little dinner with the chance to meaningfully talk with people,” matriarch Dee Smyser said. She doesn’t expect the family repeats their 90th birthday party from the pre-COVID days. “It was fun. I saw people from all phases of my life,” she said. A former reporter and Hawaii Visitors Bureau staffer, she and her late husband Bud Smyser, editor and columnist, threw many parties.

Not a one day deal

She says a birthday shouldn’t be a one-day affair. She cherishes year-round phone calls from family and friends, especially distant grandchildren, and their postcards and notes are on display. But she doesn’t like ’emotionless’ emails and text messages when ‘you don’t hear the tone of voice, you’re not allowed to give and receive conversation’. She cites a card from an anonymous author slipped into her calendar that says there’s “nothing like a hand on the shoulder or a pat on the back.”

I think his point of view echoes the sentiment of many, many people. Remember my day… but don’t forget me for the rest of the year. No matter the wrapped gift; talk to me and unpack your experiences and thoughts into a pleasant conversation.

That’s certainly the view shared by me and another family member whose recent birthday celebrations were about as low-key as it gets. We shared a few laughs and a toast at the kitchen table, were delighted by phone calls from family, but convinced ourselves to postpone dinner at a restaurant until a later date. Truth be told, there’s no great freebie that would knock our socks off; we scoff at commercial sales pitches over expensive bling and we scoff at the excessive flowery language of greeting cards. Nothing can match someone’s own words, a personal anecdote or shared memory, a bit of craftsmanship, art or cooking.

We honor our mutual wishes not to warn neighbors lest they make a fuss; I think it’s our heritage from lowly parents and our childhood in another era. A few decades ago, birthdays just weren’t a big deal for us ordinary people. A cake would probably be baked, but being born close to Christmas meant mine would probably be postponed to a later date: “there are so many cookies and sweets” already available for the Bethlehem birthday celebration which was our goal .

I reflected on birthdays last month partly because January was celebrated as the month of Kalaupapa in Hawaii. Ka Ohana O Kalaupapa’s weekly updates have distinguished special events commemorating the history of the Molokai Peninsula where leprosy patients were quarantined from 1866 until the end of quarantine in 1969. The Kalaupapa ohana des patients, their families, descendants and supporters provides a memorial that will contain the names of the 8,000 people who lived there.

The Ohana brought to light stories about the people of Kalaupapa and the people who helped and worked with them during this century of banishment, including the birthdays of Jozef de Veuster in Belgium on January 3, 1840 and Barbara Koob in Germany on January 23, 1838.

The Catholic Church has honored these two of the first assistants by declaring them saints, better known as Father Damien de Veuster and Mother Marianne Cope.

The canonization of Mother Marianne Cope at the Vatican. (HCH file photo)

Unlike most saints’ days

Seeing these documented birth dates reminded me of a bit of diverse intelligence lingering in my brain after years of writing about the Sacred Hearts priest and Franciscan nun’s journeys to canonization. Both are remembered in the church’s liturgical calendar, but unlike most saints’ days we mark each year, it is not the date of death that is remembered. The memorial of Saint Marianne is celebrated on her birthday. Saint Damien’s Day is celebrated on May 10, the date in 1873 when he set foot in Kalaupapa to begin serving there until his death on April 15, 1889.

It took the equivalent of an “act of Congress” to change the day of the Death Day holiday. The United States Conference of Catholic Bishops changed it to the American liturgical calendar in 1999 at the request of Honolulu Bishop Francis X. DiLorenzo. The Vatican refused the change but approved it a year later at the request of the American bishops. After the 2009 canonization, the Congregation for Divine Worship at the Vatican responded to a request from Bishop Larry Silva and elevated May 10 from an “optional” to a “compulsory” memorial day in Hawaii. There is a practical reason for moving away from the April date. The church does not use special saint’s day liturgies during Lent and April 15 is likely to be during Lent.

If it seems a little dark and not at all celebratory to remember saints on the day they died, there’s actually a reason for it. The first to be designated Catholic saints were martyrs murdered because of their faith, so death was celebrated as their entrance into the eternal life of heaven.

And indeed, throughout the ages, people’s birthdates were often unknown or obscure at the time they were living a life deemed worthy of holiness.

Wow, this conversation about birthdays started me on an unplanned trajectory.

I just read a story in The Atlantic magazine in November that reassured me that I’m not a weirdo for being jaded about my birthday. Writer Joe Pinsker put a light touch on an article about the history of celebrating birthdays. There are records of honored Egyptian pharaohs in ancient times and of birthday celebrations for powerful rulers or wealthy upper classes in various cultures. “Birthdays were for the wealthy or national heroes. Americans celebrated George Washington’s birthday, for example, but for everyone else, it was just another day,” he wrote.

He quoted scholars who say it was the era of industrialization in the mid-1800s that changed much in Western culture, including the way people marked the passage of time. People had to make sure they got to work or school on time; the fields of education and medicine began to measure people by age, health and development and individuals began to measure their own lives, including marking birthdays.

In the 20th century, the celebration of birthdays is in full swing with a big boost from capitalism. What a great idea to create a market for goods, to encourage a tradition that calls for re-spending every year. People have heard of the traditions and rituals of other ethnic groups and borrowed them.

There were religious people who saw self-celebration as a way to turn away from God. Some Christian and other sects still shun the observance of birthdays.

Speaking of which, I stumbled across a Google guru who pointed out that the Bible makes almost no mention of birthdays. On the rhythm, there are the Gospel accounts of the birth of Jesus. On the downbeat there is the macabre gospel account of the murderous birthday of King Herod Antipas of Judea, who was charmed by his stepdaughter Salome and granted her request for the head of John the Baptist.

Alright, back to the modern era and away from the palace soap opera. I love to cook and this is my version of a birthday present. I’m not sure our continental family will be honest with me about the state of banana bread or orange cookies that arrive in the mail a few days after they come out of the oven, but they totally get the love that sent them. My friend Dee with her legendary sweet tooth makes it easy to please. My sister here, who isn’t too fond of sweets, thinks the baking powder cookies are a winner. The kids next door and I have a tradition: I bake the cake for a family birthday once in a while; they coat the icing and scoop on the sprinkles.

So, speaking of sweets, this is the month to celebrate Valentine’s Day, so go ahead and treat yourself, even if it’s not a birthday. As The Atlantic writer Joe Pinsker concluded in his column on birthdays, “Cultural expectations have relaxed about when and whether people should achieve milestones. So when your next birthday, as a gift for yourself, relax with a nice big bowl of fruit, don’t look at the clock and take the time to neurotically compare yourself with everyone else, I think I’d substitute a bowl of pop – buttered corn.

As a birthday postscript, let me tell you that I just received a letter from Hawaii Foodbank informing me that a good friend on the mainland had made a donation on my behalf. The best birthday idea ever. What a wonderful tradition to start with. I bet everything.

“The poet cannot live in harmony with the world”.