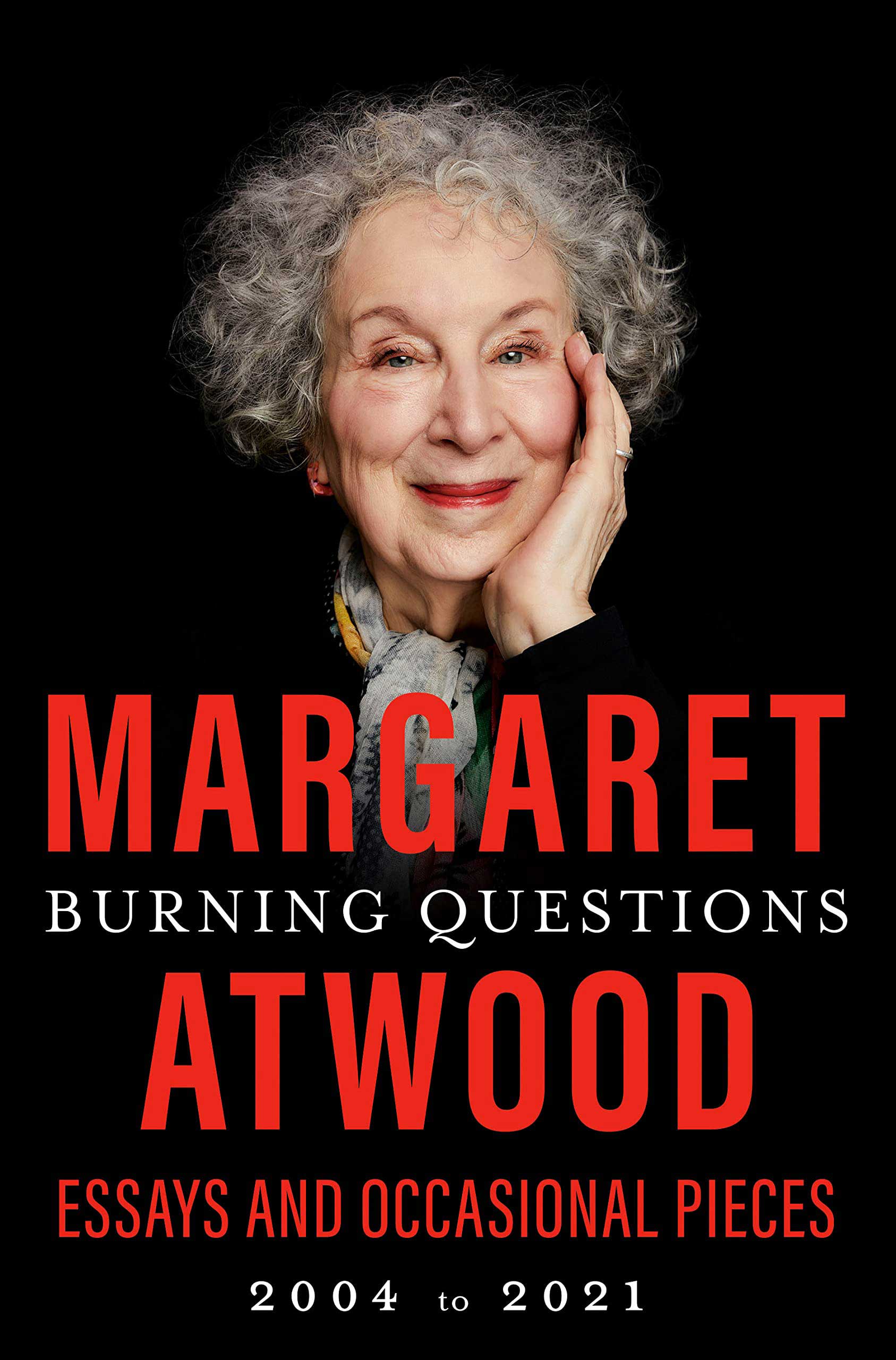 Margaret Atwood, cultural icon and multi-award-winning author of more than fifty books published in more than forty-five countries, is perhaps best known for The Handmaid’s Tale (novel and television series). It’s a brilliant, fearless and also very funny review. His new collection of essays and “occasional pieces” (introductions, speeches, obituaries) cover the years 2004 to 2021. Cut into five sections across some five hundred pages, these pieces can be read chronologically but work just as well thematically. As she writes in her detailed (and very helpful) introduction, Atwood calls this collection burning questions, “perhaps because the questions we have faced so far in the 21st century are more than urgent.” For example, the planet, states Atwood, is literally burning. Each of these pieces stands in isolation, but there are recurring themes and questions, “burning questions that I have been asked and asked myself over the past two decades”. Questions Atwood suggests that these pieces are “attempts” to answer or “attempts” since “that is what attempt means, after all: an attempt. An effort.”

For Atwood, each section is marked by “an event or a turning point”, including the aftermath of 9/11, the financial crash of 2008, the Obama presidency, the 2016 US elections, the rise of #MeToo, the elections of 2020, COVID-19, and other personal markers: partner Graeme Gibson’s dementia diagnosis and subsequent death, and milestones in his work: filming The Handmaid’s Tale and Alias ​​Gracewriting/publishing novels and his collection of poetry, Dearly. The individual pieces cover a wide range of subjects and forms, and with many, Atwood presents a mix of digression in autobiographical vignettes (counting insects in the Canadian woods with his father, semi-disastrous forays into fashion, discovering tarot , leaky roofs) with critical cultural elements (from Simone de Beauvoir and second-wave feminism to the treatment of female students at Harvard), then back to the stated topic. A common refrain in these highly discursive pieces is “but I digress”, which with any writer of lesser skill would be boring. But that’s not the case, she’s not. Because many of these pieces were written as lectures or speeches for various groups (students, lawyers, neurologists, nurses), we can hear Atwood’s voice jump off the page. Other writing in the form of book reviews and introductions for everyone from Bradbury to her own husband’s posthumous reissues is equally dynamic because, of course, Atwood’s writing voice is both accessible and convincing: it invites you and you want to continue reading.

Often his statements are direct and fearless, sometimes sharp and slippery. She is, she says, “a Scorpio” and has “never known why people sometimes felt threatened”, since she “doesn’t bother at all unless stepped on”. Although she has been mentioned (accused?) of being prophetic with her work on the financial crash of 2008, her writings on the environment, and of course The Handmaid’s Tale, she declares at the outset, “I would like to make it clear that I am not making a prophecy, not as such.” But she is observant. Throughout the collection, she describes moments in her writing process, including living in Berlin (before the wall fell) and Alabama (teaching) while writing. The Handmaid’s Talea dystopia inspired by Orwell but, unlike the majority of dystopias, written from a female point of view.

Writers can learn a lot from reading Atwood: not just her sentence form, the way she moves seamlessly between topics (love, politics, words, myth, history, clothes, bugs, brains), but also in those moments when she is very specific about the process: “Read a lot. Write a lot. Look and listen and work and wait. She tells a funny story about her first book signing for her debut novel, The edible woman, where she was pushed into a corner of a retail store’s men’s underwear department. She battles writer’s block and suggests, “If you’re stuck, try changing the time or the person.” She spreads over the pages what she identifies as treasures of the “treasure of words”: Shakespeare, folk and fairy tales, myths and religious stories; of course, not all of us speak Latin and few of us have studied with Northrop Frye, but his love of words and stories sings on the page. She’s also honest about writing: it’s not easy and you have to “have the three things: talent, hard work and passion”, as well as “luck”.

Many pieces in the collection touch on the environment, climate catastrophe, our inability to stop or even slow down the destruction of our living environment. In “Wetlands”, she defends herself against those who called her “tough”, because being “alarmist is good when the building is on fire”. And even if she spoke in this case in 2006, it still rings true: “In a world of epidemic or mass catastrophe, having lots of money and a private medical plan will not do you any good.” In effect. His tribute to Rachel Carson on the occasion of the fiftieth anniversary of silent spring is essential reading, especially in how Atwood connects his personal story to our shared history of climate catastrophe. In “How to change the world? she provides an in-depth identification of fundamental issues, suggestions on how to move forward, and the role of speculative fiction in highlighting and encouraging change. And then she gives us this zinger: “Nature doesn’t care about our human desires. Physics and chemistry don’t negotiate and don’t give second chances.

About halfway through the collection is “Reflection on The Handmaid’s Talewritten for the thirtieth anniversary of the novel’s first publication. Initially, she tells us, the novel “was scattered throughout the New York Timesbut readers loved it, and it offers both a celebration (she loves people dressing up as maids on Halloween) and a story of her novel’s sources and inspirations, asking the questions, “Did this novel still relevant? If so, what and why? Can novels be prophetic, and if not, why not? It’s a brilliant study of the making and life of a book and how speculative fiction can show us possible futures and hopefully inspire us to take different paths.

Although Atwood can be silly (see “Cat’s Robo-Cradle”) and very funny (“Anne of Green Gables”, “Bring Up the Bodies”), she can also be fearless, speaking out against injustice wherever she sees it. (she is a long time supporter of Amnesty and PEN). In her articles on Eduardo Galeano (“Memory of Fire”), on forced childbirth (“A Slave State?”) and “We Are Double-Plus Unfree”, she does no harm. For Atwood, modern society is “double plus unfree” (to use Orwell’s language), governments apply to us the “methods of cattle breeding of agribusiness: ear tags, barcodes, sorting by number, record. And slaughter, of course. Our prison systems are not meant to be reformed, but simply warehouses “where people are hidden” – in the United States, young black men and in Canada, young First Nations men (also, women, I would add). Of course, Atwood often positions herself as the champion of feminism (not everyone agrees with that – see her article “Am IA Bad Feminist?”).

Sure, there’s a powerful visual impact on the handmaidens inspired by her novel appearing at pro-choice protests: all those red hoods (!), but in a 2016 “We Hang By A Thread” speech, she continues to providing the necessary horn call, “This reminds us that the hard-won rights of women and girls that many of us now take for granted could be snatched away at any moment.” In this piece, Atwood acknowledges her place as an icon but tells us, “I was not always the supposedly revered aged icon or the creepy granny witch figure you see before you today. I haven’t always had a battalion of imps and invisible goblins to come to the rescue in the form of 1.29 million Twitter followers. (over 2 million as I write this). And although it’s a nod to his position and power, in “Tell. The. Truth.” (a speech to accept the CHS Burke Medal at Trinity College Dublin), Atwood asks “But what is power?” In this speech, she quotes both Orwell and Le Guin in a discussion of what it means to write, to respond to power. For Orwell, “if freedom means anything, it means the right to tell people what they don’t want to hear…Say. The. Truth.” And for Le Guin, “anger is a useful, perhaps indispensable, tool for motivating resistance to injustice.” But, Atwood reminds us, “An emotion does not justify an action.” that, as writers, we have to “do the research. Check everything for accuracy. Make sure you have the facts.”

Writing about Bradbury, Atwood provides an excellent description of herself, “[he] had a lot on his mind or maybe a lot on his mind. Her wide range of interests, boundless curiosity, versatility, inventiveness and fascination with human nature.…” All of these aspects of Atwood’s own work appear throughout this collection, as she puts it, “ warts and all. “When we ask the question of what it means to be human,” Atwood says, “the arts are not a luxury. They are at the heart of the problem. Despite the difficult truths told in these many pages, there is humor here and there is hope: “It is dark inside the wolf, yes; but it is light outside the wolf. So: how can we get there? Atwood proclaims herself “a screaming optimist” and even in her deep dive into our fascination with zombies, she addresses us directly: “I wish you hope.”

This collection clearly shows what many of us already know, Atwood is one of our greatest writers, and although she claims not to be prophetic (ha!), we should all be careful what she said.

AGF Management: The Biggest Surprise of the War — The Inept Russian Army

Concert review: Tyler, the creator of the Capital One Arena