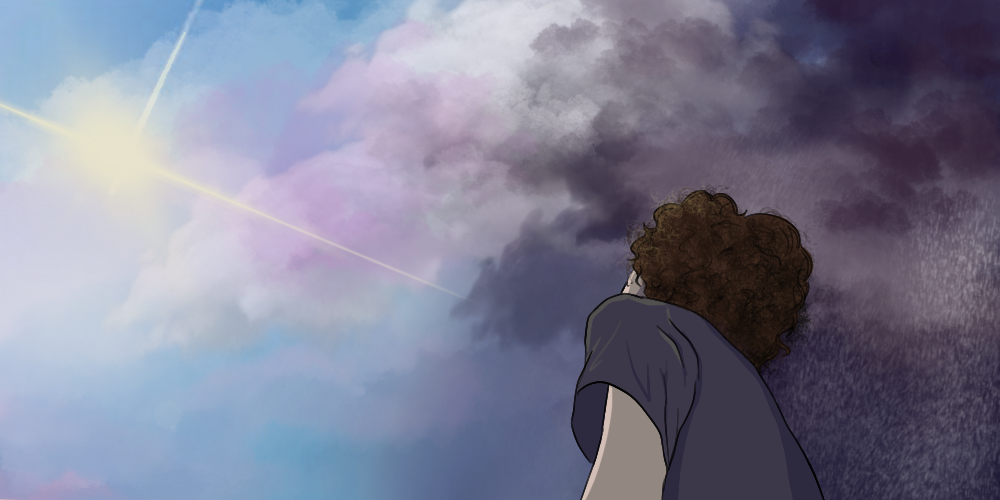 It’s always showtime in the sky

I had always thought that the only relationship between weather and movies was that a rainy day was a good time to see a movie. Then I read an excerpt from Virginia Woolf’s essay “By being sick,in which she looks up to the sky while in bed and sees:

. . . this incessant making up of shapes and overturning them, this churning of clouds and bringing together vast trains of ships and wagons, this incessant tinkling of curtains of shadow and light, this endless experiment with golden rods and shadows blue, to veil the sun and to unveil it, to make stone ramparts and carry them away. . . We must not let this gigantic cinema play perpetually in an empty house.

Woolf’s passage not only provides the title of Gigantic Cinema: A Weather Anthologyedited by acclaimed British poet Alice Oswald and poetry editor Paul Keegan, but also exemplifies the kind of ‘visceral’ language about time, from ancient to modern, that the editors have selected for their book.

To “expose” us graphically to the weather, the publishers have relegated the titles of the entries to the end of the book and the authors to the bottom of the page, so, as Oswald puts it, the reader “meets each voice abruptly, like an exclamation caused by time. Moreover, there are no signs indicating that we read poetry or prose, fiction or “reportage”, and there are almost no dates. Another innovation of the anthology is to frame the 300 very varied entries in an “omniform day”, organized from morning to evening but covering centuries. This approach is similar to that used by Osborne in his book-length poem Sleepwalking on the Severn, in which she records images and voices at night along the River Severn, England, during five phases of the moon. The largest gigantic cinema opens with an owl hooting to announce the dawn, then shifts unpredictably to such phenomena as the “proper names” of the “faces of heaven”, the effects of climate on people, the weather in hell (according to Dante’s phrase Hell)the wind in all its varieties, the “Chinese Dragon” linked to the clouds, a stone as a diary of the weather, mists, rain-loving Africans, a dream of land losing the sun and the solar eclipse of 1921. Pity the poor evening news broadcaster who should be reporting on the weather on this “omniform” day!

However, the most original aspect of gigantic cinema is the relation of writing to time. As Oswald puts it in her preface, she and Keegan aimed to “move away from writing ‘about’ time” and instead find “writing that is ‘like’ time, that has the sovereignty of pure event. . . which we “buffet” indicates an external world that moves behind the tongue. Woolf’s passage above is so apt that Oswald calls it “the voiceover of this anthology.” And in other excerpts, we see that there are as many ways to be shaken as there are types of weather.

Seeing is not the only way to perceive a meteorological event. Author John Hull, who is blind, follows the intricacies of a thunderstorm with focused hearing. When an early morning rain wakes him, he leans his forehead against a windowpane in his quiet home and discerns that the sounds of the rain differ in where they fall on the house, how fast they fall, how loud and how loud they sound. height. . “The more I listened,” writes Hull, “the more I found I could discriminate, building block after block of sound, noticing regularities and irregularities, dimension after dimension.”

One way to write “like time” is to create your own time in a poem. This is exactly what Wassily Kandinsky, best known for his paintings, did in his abstract poem “Bassoon.“In a city without a name, weather changes and their effects are not caused by weather forces but by colors and sounds. “A large orange cloud in the shape of a hard-boiled egg” emits “purple”. When a storm finally strikes, the thick-walled buildings crumble, but the “long quivering branches” of a “bare tree” come to rest. When the orange cloud disappears, the sky turns “piercing blue” and the city turns “yellow enough to make you cry”. The notes of a bassoon give everything—including people—a green color that becomes “brighter.” . . colder . . . more toxic.

By including the surreal imagery of “Basson” in gigantic cinemathe editors made the other factual yet dramatic entries look a bit magical as well.

When Oswald said she and Keegan were looking for writing that was “like time,” she added, “As if time had to be written (as it does in Apollinaire’s rain calligram).” It’s a visual poem that pops up even if you just flick through Huge cinema.

Apollinaire was an early 20th century avant-garde poet who wrote in French. His trademark calligrams were graphically designed to present language and image simultaneously. In the calligram”The tie and the watch,for example, the text is arranged to describe these two objects while expressing Apollinaire’s idiosyncratic hold on them. His calligram”It is rainingis more kinetic. The five lines of varying lengths are printed vertically and slant left to right, suggesting that rain is being blown by the wind. Also, the tiny font makes the French text look like raindrops.

The English translation by Roger Shattuck (provided in the index) tells us of the fantasies that Apollinaire harvested from the rain, such as: “It is raining women’s voices”; “These rising clouds begin to neigh a whole universe of auricular cities”; “Listen to fall the bonds that hold you above and below.” While this example of weather writing in itself doesn’t immediately inspire visions like Apollinaire’s, the next time it rains, you may be encouraged to grab your umbrella and fire up your imagination.

This “time-like” writing is similar to what contemporary composer John Luther Adams does in his music. “My music moves inexorably from location to location,” Adams said, and that includes location weather. Obviously, the composer has more tools to imitate time than a writer. Adams has spent much of his life in Alaska, and his article on the state is The Earth and the Great Time“much of which”, as music critic Alex Ross has described it, “is devoted to singing the place names and descriptive phrases of the native Iñupiaq and Gwich’in languages, both in the original and in the translation. and ranges from “ethereal sounds for the strings” to the visceral pounding motions of the drum quartets.

Not all clips in the anthology reproduce the weather to the same degree. But readers will discover a treasure trove of weather gems throughout the book.

A poem by Derek Mahon recounts the participation of the 17th century Japanese poet Basho in a “snow party”, where:

There’s a jingle of porcelain
And china tea;
There are presentations.
So everyone
Crowd at the window
To watch the snow fall.

Gerard Manley Hopkins scrutinizes the variations of sunsets: “Four colors, in particular, were noticeable in these afterglows, and in a fixed order. . . orange, lowest and closest to sunset; above this, and broader, green; above, wider still, a variable red, ending in crimson; above, a pale lilac. A short poem by John Clare beginning “The Whispering Thunder” succinctly describes what happens to “hay people” who “miss the rake” during a sudden thunderstorm. First “. . . the whole gang do a bigger haycock / to sit under . . . “, then after an hour:

A small flood flows over the leaning rake
In the soft but dry hay, the hay people curl up
& some under the cart avoid the shower.

In the middle of the entries made up of several paragraphs, even pages, one sometimes comes across a radiant detail that serves as a pause in time, like this in its entirety of a dance of the Yuma deer: “The waterbug draws the evening shadows / towards him on the water.

I was surprised that out of the 300 entries in gigantic cinema, only three of them complained about the weather. Yet all three are sweeping condemnations. One of them is an entry in Gustave Flaubert Dictionary of received ideas: “WEATHER. Eternal topic of conversation. Cause of all illnesses. Always complain. The title of Charles Baudelaire’s poem “Spleen IVwarns us that this won’t be a hymn to the elements, but nothing could prepare the reader for verses like: “When the sky low and heavy hangs like a lid over the groaning mind”; “When the rain, dragging its immense oblique lines, mimics the bars of a vast prison”; “And long funeral processions, without drums or music, parade slowly through my soul.” Wyndham Lewis uses large, bold type. all caps and underlined – a graphic style found in his BLAST diary – to refer to the lack of snow and ice in London one winter: “CURS the flaccid sky that can produce no snow . . . .” And, angry that a lake in Hyde Park is not frozen:CURSE the flabby air that can’t stiffen the Serpentine’s back . . . ”

Frankly, I missed seeing my favorite poem about complaining about time, a parody of the anonymous folksong “cuckoo song” was welcoming. It’s the cathartic”old music,one of the few light lines by Ezra Pounds, which begins:

Winter is icummen,
Lhude sings Goddamm,
The rain falls and stains the mud,
And how the wind hammers!
Sing: damn.

I think of this poem every year here in Wisconsin, where we often don’t see the signs of spring until April. In other words, “Winter is ilingeren.”

It’s only fitting that the author of the most famous weather quote (“Everyone talks about the weather, but….”) has the last word. Excerpt from Mark Twain’s novel The American plaintiff in giant cinema confirms that he did indeed do something about the weather: he moved it to the end of the book. He writes that he did so for the good of the reader:

“Many readers who wanted to read a tale to the end were unable to do so due to weather delays. Nothing halts an author’s progress like having to stop every few pages to disrupt the weather.

Twain did not remove weather entirely because it is “necessary to any narrative of human experience”. So not only did he move time, but he also thought it best to “borrow” those descriptions from authors who knew how to write them better than he did (“give credit, of course”).

If only it were that easy to move our daily weather from one place to another and choose the best conditions available for our own city! •