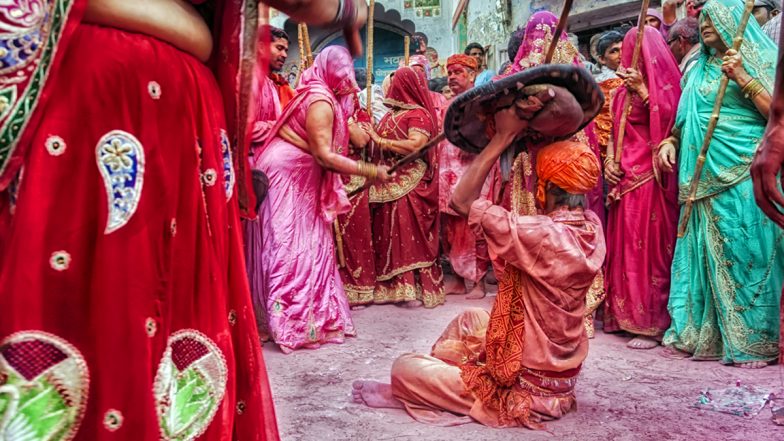 Holi 2022: From Lathmar to Hola Mohalla, here’s how Holi is celebrated in various parts of India

New Delhi, March 17: The Holi festival of colors is knocking at our doors and so is the vernal equinox. India is a land of diverse cultures and traditions and Holi is one of the festivals in the country that fills you with jubilation and festive joy.

Holi is essentially the festival of colors, which signifies the victory of good over evil, but it is celebrated across the country in different ways. Here are some of the inimitable and popular ways to celebrate Holi in different parts of the country. Happy Holi 2022 Wishes & HD Images: Send WhatsApp stickers, festive quotes, colorful wallpapers, sayings and SMS to your family and friends on Rangwali Holi.

In Uttarakhand, Holi celebrations are called Kumaoni Holi. Going by the name, it is obvious that the celebrations take place in the Kumaon region of Uttarakhand. The common names of the festival are Kahila Holi, Khadi Holi and Baithaki Holi. During the festivities, people make a “toli” (gathering of people) and sing and dance to folk tunes that travel through the city, while wearing traditional outfits. The musical affair also means welcoming the season of spring – the start of the sowing season for the farming community. A night before Holi, people also gather to light the Holika bonfire.

Hola Mohalla, a popular three-day fair observed at the Shri Anandpur Sahib in Punjab, is a big festive event for Sikhs around the world. The festivities include a display of martial arts, horseback riding and poetry recitation, primarily to pay tribute to the bravery of Sikh warriors. Later, the festival is followed by dancing, music and color spraying.

The Lathmar Holi of Uttar Pradesh is one of the most famous Holi celebrations taking place across the country. In the regions of Barsana, Mathura and Vrindavan, known as the cities of Radha and Krishna respectively, Holi begins at Basant Panchami and continues for over a month. Thousands of devotees and tourists visit the cities to witness this frenetic version of Holi.

On the day of Holi, women run after men with ‘lathis’ or sticks and playfully beat them in this celebration. The men, on the other hand, come prepared with a “dal” or shield. Other cities like Kanpur and Gorakhpur also hold fairs known as ‘Holi Mela’ to celebrate the festival with great enthusiasm.

Popularly known as ‘Royal Holi’, Holi in Rajasthan is observed at a high level and is organized by the royal Mewar family of Udaipur. People perform traditional Holika Dahan rituals a night before Holi, followed by the royal cavalcade including several decorated horses and the royal band passing through the city.

With great excitement and anticipation, the people of Maharashtra celebrate ‘Rang Panchami’ or ‘Shigma’. The festivities begin after sunset on Purnima with Holika Dahan, symbolizing the victory of good over evil. The next day, people apply gulal and spray water on each other. The celebrations are incomplete without the preparation of ‘Puran Poli’, a sweet buttery flatbread made of chana dal with the stuffing of jaggery, coconut, cardamom and butter or ghee. When you get home from playing Holi, one heavenly bite of this piping hot succulent dish is enough to satisfy your cravings.

The traditional way people celebrate Holi in Kerala is known as ‘Ukuli’ or ‘Manjal Kuli’. People visit the temple on the first day and continue the festivities on the second day. Instead of applying gulal, people of Kerala perform Holi with turmeric or other natural colors.

With ‘Bura Na Mano Holi Hai’ being the slogan of the day, Holi unites the varied peoples of India.

While different states have their own methods of observing the festival, the above mentioned are some of the popular ways to celebrate the festival of colors in India.

(This is an unedited and auto-generated story from syndicated newsfeed, LatestLY staff may not have edited or edited the body of the content)