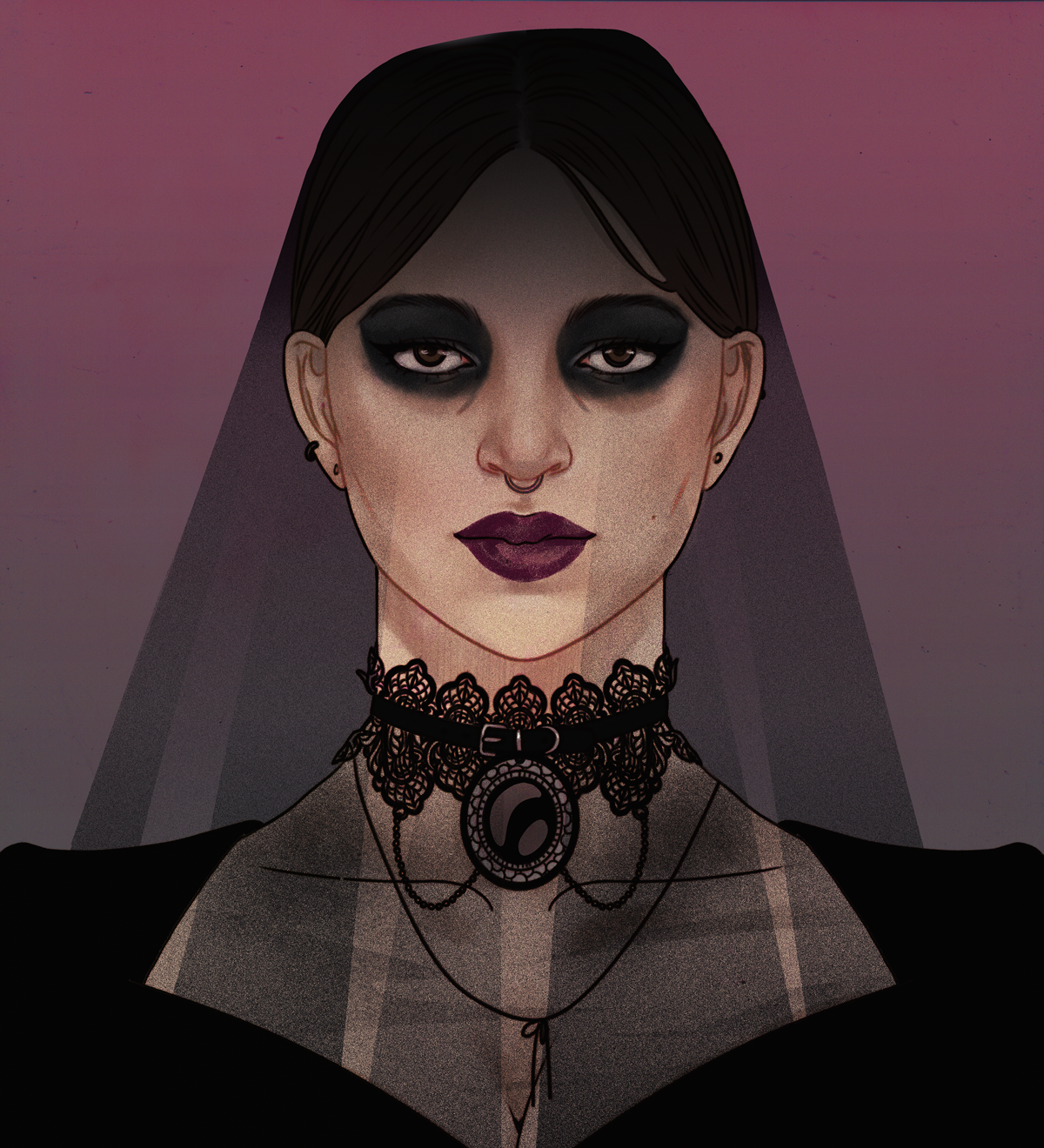 Aafter death of her husband, Prince Albert, in 1861, Queen Victoria was so elaborate in her clothing choices that she inspired the Gothic style that persists today. Not only did she enter a period of prolonged seclusion, rarely appearing in public for decades, but she also wore only black until her own death, forty years later. It was a sumptuous darkness, taking the form of sheer veils and extravagant robes of velvet, silk, and satin, which floated around her like a cloud. A jacket at the waist, which she often wrapped around herself and buttoned up to the chin, signaled that her heart was closed for business. She haunted the halls of Buckingham Palace like a specter of grief. Death became her – as she did for many in the Victorian era.

Following the Queen’s example, black mourning dress became popular and was worn from three months to two and a half years after the death of a loved one. Magazines and manuals provided detailed instructions on how to style one’s hair in mourning, and some stores sold mourning clothes exclusively. It didn’t stop in fashion: as they mourned, Victorians would drape their homes in darkness, keeping their curtains drawn at all times of the day and night. Upper-class funerals were elaborate affairs, with huge monuments flanking headstones and processions of hearses, horses and coaches. Women were known to throw themselves on coffins screaming the name of the deceased. This penchant for darkness, or memento mori (Latin for “remember you must die”), permeated Victorian culture, from literature, where stories of the walking dead reigned supreme, to architecture, where the cavernous and the imposing prevailed.

“Victorians were obsessed with death,” says Carol Margaret Davison, editor of Hymn Studies in Gothic Literature and professor at the University of Windsor. “It was mainly because of growing anxiety about the existence of life after death.” Along with Victorian anxieties about God and the Queen, sickness and death were rampant. It was not uncommon for entire families to be wiped out by tuberculosis, cholera, scarlet fever, yellow fever or the Russian flu. There was no choice but to embrace death and find beauty through fear and loss.

It’s a feeling that, in 2022, feels familiar. We may not walk around in black veils, but COVID-19 is a powerful reminder of our mortality. Since the start of the pandemic, more than 6 million people have died. Reminiscent of the 19th century, mass graves have appeared in Italy and New York. Rates of depression and anxiety are higher than they have ever been, with the World Health Organization reporting a 25% increase since the start of the pandemic. We live in what feels like a state of constant impending doom, and just like the Victorians, this defines a new Gothic era.

Iit was not before in the 20th century, when advances in medicine allowed treatment in hospitals, the Victorian embrace of mortality began to fade. In previous years, people often died at home, able to say their last words surrounded by family. A more medicalized process, however, created a wall between life and death. Suddenly death was an isolated event, something that normally happened under the supervision of nurses and doctors. As new treatments became available for once incurable conditions, death began to look more like a problem to be solved than a fatality. Since the Victorian era, average life expectancy has nearly doubled and attitudes towards death have changed. “We fully sanitized it and made it invisible as much as possible,” says Davison. This extends to the way we cry. While funerals were once big days, they are now generally smaller and more quietly dark.

But, in the past two years, death has once again taken center stage. “So many people who have died in the past year, whether from the pandemic or hate crimes, are dying in front of us and we can’t turn away and ignore it now,” says Professor Deborah Lutz. . of Victorian Literature at the University of Louisville. She adds that, recently, conversations surrounding not just death, but also race and inequality — including everything from the Black Lives Matter movement to the annual women’s marches that take place around the world — have only escalate, culminating in a modern gothic resurrection that merges the morbidity of the Victorian era with the rebellion that defined the subculture in its initial 1970s revival.

When most people think of goths, a combination of dark clothes, black nail polish, morbidity, and snarl probably comes to mind. What it really means to be a goth, however, goes beyond aesthetics. Taking root in Britain, the goth culture of the 1970s was a rejection of the health-conscious conservative mainstream – fad diets, neon-tinged aerobics classes – that took hold after the election of Margaret Thatcher . Because conservatism was spreading and racial tensions remained high, it was a period that sparked a pushback, eventually igniting the women’s rights and gay liberation movements.

As rebels, the goths of the time expressed their dissent not only by what they wore – from harnesses to fishnets to Victorian-inspired collars and draperies – but also by what they wore. represented. They challenged the status quo by rejecting indifference and ignorance and embracing harsh realities. As David Lenson wrote in the 2007 collection of essays Goth: undead subculture“The union of angst and aesthetics is standard fare; it may be that for some goths, their eviction triggers a confluence of artistry and anger, a stance inherited from punk.

This new gothic attitude proliferated in the 80s and into the 90s, when the internet provided a space above the basement where people could easily find communities, as well as aesthetic inspiration. Today, the internet remains a haven for modern goths, with #goth garnering nearly 11 billion views on TikTok. Between 2019 and 2022, the Gothic forum on Reddit grew from 19,000 subscribers to over 100,000.

While the latest version of Gothic is still about rebellion, it’s just as much about acceptance. This also translates to film and television. Cruella de Vil and Wednesday Addams, the original fictional actresses of The Macabre, first appeared on screen in the 1960s. They have since become feminist icons and become increasingly rebellious in the live-action remake. Disney stock in 2021 Cruel and Tim Burton’s upcoming Netflix series Wednesday, respectively. In the way they wear and speak their darkness, both characters are free from inhibitions. In their original iterations, this disinterest in conformity made them strangers. Today they are positioned as icons – their anarchy is so strong and exaggerated that we celebrate it. Their appeal may be partly nostalgic, but it also resonates with the present.

NOTOuch, two years and millions of deaths in this relentless pandemic, it feels like we’ve been given a new awareness, forced to deal with mortality in ways many of us have never experienced. previously. It turns out the Victorians were onto something: there’s relief to be found in coming to terms with the end, and resisting death only breeds greater fear. As the Victorian poet Charles Baudelaire wrote in “Death of the Poor”,

It is Death that consoles, alas! and that makes us live;
It’s the purpose of life, and it’s the only hope,
which, like an elixir, uplifts and intoxicates us
and gives us the heart to walk until nightfall.

As difficult as it is, our present time offers us an overdue opportunity to gain a deeper understanding of death. Engaging in gothic culture can be a way to accommodate life’s transience and mystery without losing the courage to stand up to injustice.

Sadaf Ahsan is a Toronto-based arts journalist at Canadian Press and the co-host of the pop culture podcast Reheating. She is also a blog editor at Shameless magazine and previously worked at Now Magazine and the national post. She dreams of living a life that Nora Ephron would be proud of.

Maria Nguyen is a Mississauga-based illustrator and designer. His work has appeared in the New York Times and the national post.

Here’s why illustrator and designer Lauren Tamaki wants you to support The Walrus:

“My last work for The Walrus was a portrait that accompanied a review of Sheila Heti’s new book, pure color. I love collaborating with the art directors of The Walrus because I always know the result will be spectacular.” – Lauren Tamaki

For just $5 a month, you can support the work of The Walrus online. All supporters will receive a free tote bag, gain access to exclusive updates, and join the community that fuels the work we do.

Be part of The Walrus.

Monthly donations are eligible for a charitable tax receipt.

Harold Jonas Scofield publishes two spiritual and inspiring books: the first devoted to the power of God in the face of adversity, the second a tribute to the inspiring life of Tupac Shakur