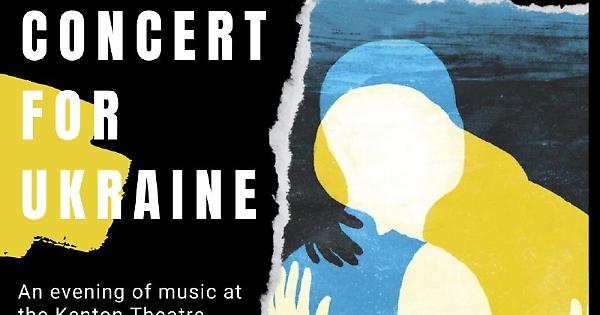 OVER £16,000 has been raised by Henley’s Concert for Ukraine.

A Ukrainian dance group and Nick Heyward, lead singer of 80s pop group Haircut 100, were among those performing during the show at the Kenton Theater last Thursday.

The concert, hosted by Rebecca Poole, aka singer-songwriter Purdy, sold out and more than 500 people paid £30 to watch the live broadcast.

The show was opened by Purdy, who sported a yellow flower and a blue flower, accompanied by former members of The Quotes.

She performed defend your lovewhich she wrote during the first coronavirus lockdown about wanting to help when you feel far away.

She then sang Too in love with lovewhich she said was about wanting a better world.

Purdy said: “I’m so grateful to the amazing musicians for coming and giving their time for free and the Kenton Theater who provided the venue for free.

“We brought together some amazing people in the span of about five days.”

She urged people watching online to keep donating, saying she felt like she was on a TV shopping channel.

Journalist Linda Serck, who
co-hosted the concert, said: “We are here to help fund crucial humanitarian aid for the four million people fleeing their homes and facing an uncertain future – 100% of the proceeds will be donated to them.”

The next act was Mo Evans, from Sonning Common, who performed one of his own songs while playing keyboards.

He replaced James Carrington, who was unable to play after testing positive for covid-19.

Evans said he was working as a laborer when he received an email from Miss Poole at lunchtime that day asking him to perform and went to the theater straight from work. He said: “It was the only day of the week that I was asked to stay late, so my body aches and I’m very tired.”

Then Jazz Morley, from Bournemouth, sang his latest single Nobody knows then that of Joni Mitchell A case of youwhich she said was one of her favorite songs.

She then goes to the piano to play Unpluggeda song she wrote 12 years ago when her brother went to fight in Afghanistan with the army.

When the song ended, Purdy returned to the stage in tears at what she had heard, then introduced the next act, 14-year-old Felix Richardson. Felix, of Deanfield Avenue, Henley, sang Heal the Pain by George Michael while playing guitar.

He said: “Thank you Purdy for letting me play with these wonderful people. I’m too young to remember some of them in their prime.

The audience laughed and Ms Serck said: “Our 80s pop legend will be performing very soon. I wish I could say I’m too young to remember him, but unfortunately I remember him very well.

Antonio Gresko, president of the Reading branch of the Association of Ukrainians, Great Britain, then took the floor.

He said: “At 4 a.m. on February 24, the peace in Europe was destroyed. A European country called Ukraine, which takes less than three hours to fly, has been woken up by its first bombs – a peaceful country that has a strong culture, history and language, a country that opens its doors to friendly visitors and who loves nature, but now everything has changed.

“Ukrainian cities are now being bombed and civilians are being killed every day, turning our beautiful Ukraine from a kaleidoscope of colors into a war-torn monotone grey. Today we are all Ukrainians. Mr. Gresko then introduced Prolisok, a Ukrainian dance group based in London.

At the end of the show, the band unveiled two Ukrainian flags and received a standing ovation from the audience.

After an interval, Purdy performed a song titled You make me happy before introducing Jesse Smith, 31, who performed one of his own songs on keyboards.

He was later joined by his former bandmates from The Quotes, Dan Western on drums, Ashby Barber on guitar and Liam Barnes on bass to perform two more of his songs, Marathon and TMO.

Barnes then performed a solo by Porch.

Heyward then performed Haircut 100 love plus one before thanking Purdy for organizing the event.

He then asked people to dance while he played Favorite shirt (boy meets girl) from 1981.

Spectators got up and danced in their seats or in the aisles and a woman danced with the Ukrainian flag. Heyward closed his set with Fantastic day.

Purdy thanked everyone for coming and said it was amazing to see everyone smiling and laughing.

She then invited all the artists to come back on stage for a collective performance of With a little help from my friends.

Afterwards, she invited onlookers to take selfies with the performers and put money in the collection buckets that had been given out during the show.

The money raised will go to the Disasters Emergency Committee’s humanitarian appeal.