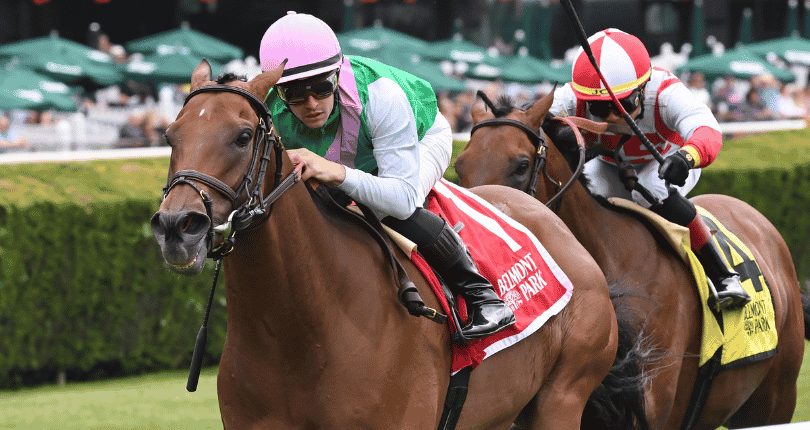 From the NYRA Media Team:

Wolfie’s Dynaghost, with Luis Saez, broke well and led the five-horse field through a first quarter mile in 24.05 seconds on the business as Flavien Prat set up a rank Masen in second.

Masen was moving well down the straight as the public sector piloted by Jose Ortiz steered outside of a sanctuary city saving ground and a two-wide penalty in a stalking position on a half- mile in 48.26.

Wolfie’s Dynaghost led the field around the turn as Prat maneuvered Masen out and into the clear, taking command on the stretch call with the public sector launching an outside rally and Sanctuary City rounding the corner.

Masen, with right-handed encouragement from Prat, stayed solid on the wire for a one-length victory in a final time of 1:34.16. Wolfie’s Dynaghost completed the exacta with a nose on Public Sector, which was a nose better than fourth-placed Sanctuary City. A penalty completed the order of finish.

The victory marked the fifth victory of the competition for Prat.

“He broke well and when I asked him to turn off, it took him a little while,” Prat said. “It was a slow pace so that didn’t help, but after that he turned off fine for me. He has a good turn in the foot so I wasn’t that worried about the slow pace . It was just about getting it to die out. After that, I was fine.”

Masen, a three-time winner at Leopardstown for former conditioner Ger Lyons, finished second by a nose behind Shirl’s Speight on Brown’s debut in the Grade 1 Maker’s Mark Mile in April at Keeneland. He followed the last with a five-pitch run in the Seek Again on May 22 on a smooth run at Belmont in which Wolfie’s Dynaghost passed out at the last of 3.

Brown said the winning effort will propel Masen to Grade 1, $500,000 Fourstarve on Aug. 13 at Saratoga Racetrack, which offers a “Win ​​and You’re In” spot at the Breeders’ Cup Mile.

“He ran just in a month, which is a little tight for him, but I wanted to have another run by the Fourstardave. It worked out,” Brown said.[He was] a little stubborn after the slow first quarter, but he settled in nicely after that. Flavien indicated he was pretty much in control from there and just decided when he wanted to take over.

Brown said he was a bit concerned that Masen was stubborn in the first strides from the gate.

“I didn’t want to take too much from him, having to reposition him outside Wolfie’s Dynaghost, who had a much better run this time and I expected that. He’s a beautiful horse,” Brown said. “We expected a better fight from him today and he gave it to us. Fortunately, Masen was able to find some more.

Public sector Klaravich Stables had a terrific second season, winning the Grade 2 Hall of Fame and Grade 3 Saranac in Saratoga, as well as the Grade 2 Hill Prince in Belmont. He arrived in Poker after an off-the-table effort in the Grade 1 Turf Classic on his seasonal debut on May 7 at Churchill Downs.

“[It was] a good regrouping run from him after drawing a line through his run to Churchill on a grass course he didn’t like,” Brown said. “He needs a bit more pace to run. He narrowly missed second place by a nose and was coming regularly. I think he prefers a mile and a sixteenth and a mile and an eighth anyway, which we know. We’re going to build from that and figure out where we’re going to go next.

Wolfie’s Dynaghost, featuring Saez for the first time, returned to solid form when he was second to the 3rd grade Appleton in April at Gulfstream Park for trainer Tom Albertrani.

“He broke pretty hard. He took the lead and he tried until the end,” said Saez. “I think Saratoga will be a better place for him. The turn is short and the track is fast. I think he will like it there.

Bred in Britain by his owner, Masen is out of the Smart Strike mare Continental Drift, whose Intercontinental dam was a multiple-time Grade 1 turf champion for Brown’s late mentor Bobby Frankel. In addition to Intercontinental, Masen’s third dam Hasili produced four other Grade/Group 1 winners for Juddmonte.

America’s Day at the Races will feature daily coverage and analysis of the Spring/Summer Meetup at Belmont Park on FOX Sports Networks. For the full broadcast schedule, visit https://www.nyra.com/belmont/racing/tv-schedule.