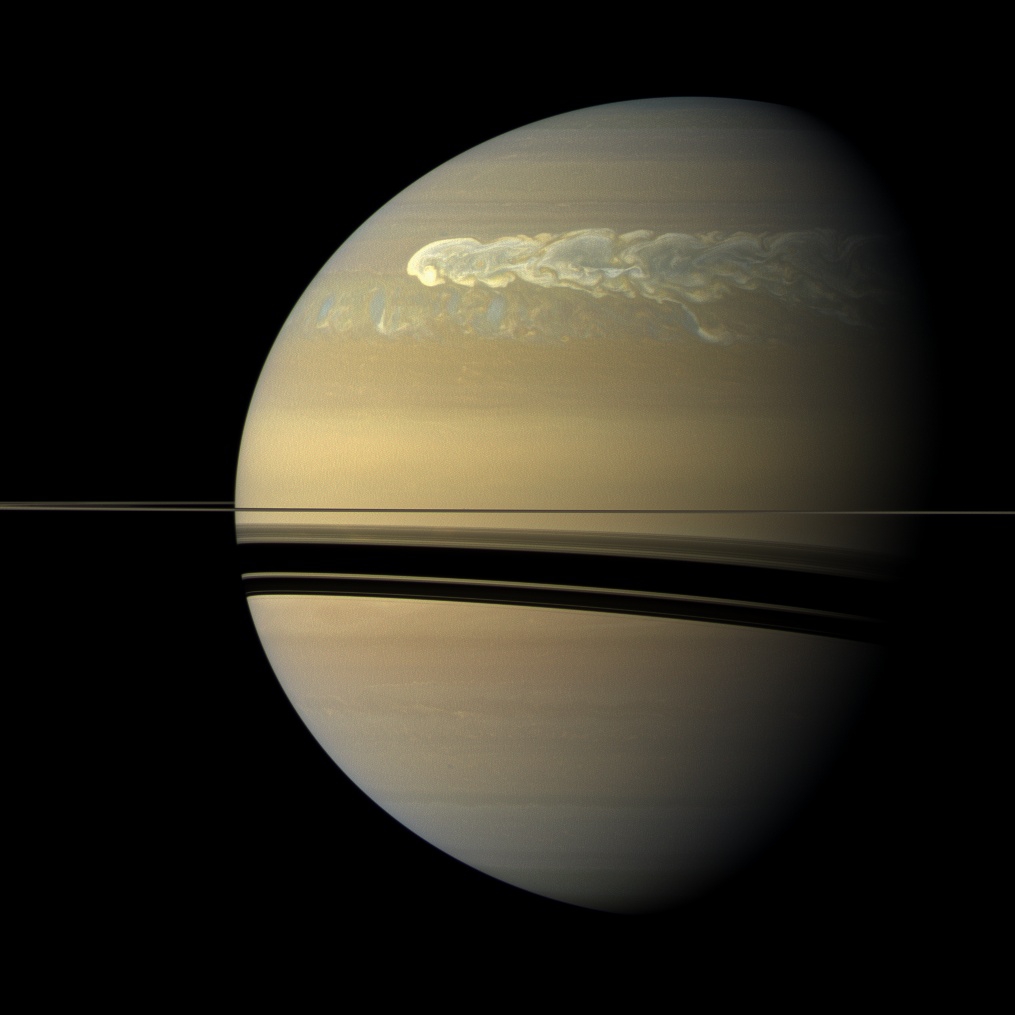 A huge storm (large white patch) that cuts through the atmosphere in Saturn’s northern hemisphere is catching up as it circles the planet in this real-color view from NASA’s Cassini spacecraft. / Photo: NASA / JPL-Caltech / SSI

RAM (March 21-April 19): Aries actor Leonard Nimoy has become mega-famous playing the role of Spock, an alien from the planet Vulcan in the “Star Trek” franchise. He has always enjoyed the role, but in 1975 he wrote an autobiography called “I am not Spock”. In it, he clarified how different he was from the character he played. In 1995, Nimoy published a follow-up autobiography, “I Am Spock,” in which he described how he looked like the fictional alien. In the spirit of the expansive self-definition of Nimoy, Aries, and in accordance with current astrological potentials, I urge you to make it clear to people who you are and who you are not.

TAURUS (April 20-May 20): The poet Rumi said: â€œA lover has four streams within, water, wine, honey and milk. With that in mind, Taurus, I would recommend that you look for a helping hand in the honeycomb. Your passions and feelings have been going well enough, but lately they’ve been lacking in sweetness. As a result, you don’t get as much sweetness that you need from the world around you. Your mission is therefore to intensify the flow of honey within you! Remember the principle â€œLike attracts likeâ€.

GEMINI (May 21-June 20): I’m glad you are not on planet Saturn at this time. The winds there can be 1,000 miles an hour. But I would like you to feel a sharp breeze as you take a walk in nature here on Earth. Why? Because according to my interpretation of current astrological omens, the winds will have a purifying effect on you. They will clear your mind of irrelevant worries and trivial concerns. They will uplift your thoughts as well as your feelings. Do you know the origin of the English word “inspire”? It’s from the Latin word Inspire, meaning “to blow in, breathed in by the spirit”. Its figurative meaning is “to inspire, to excite, to ignite”. The related Latin word spirit refers to â€œa breath of the windâ€ and â€œthe breath of a godâ€ – hence â€œinspiration; breath of life.”

CANCER (June 21-July 22): Cancer author Franz Kafka has placed his characters in surreal dilemmas. In his short story “The Metamorphosis”, for example, the hero wakes up one day and finds that he has transformed into a giant insect. Despite his wild imagination, however, Kafka had a pragmatic relationship with consumerism. â€œI don’t read the ads,â€ he said. “I would spend all my time wanting things.” In accordance with astrological omens, I invite you to adopt his down to earth attitude for the next two weeks. Take a break from your cravings, period. Experiment by feeling free from any desires that are constantly demanding your attention. Please note: this pause in action will not last forever. It’s just a vacation. When you start wanting things again, your priorities will have been realigned and healed, and you will feel refreshed.

LEO (July 23-August 22): Author Umberto Eco said that beauty is boring because it â€œalways has to follow certain rulesâ€. A beautiful nose has to be the right shape and size, he said, while an â€œugly noseâ€ can be ugly in a million different and unpredictable ways. I find its definition narrow and boring, and I prefer that of the philosopher Francis Bacon, who wrote: â€œThere is no excellent beauty which does not have a strangeness in proportion. The poet Charles Baudelaire agreed, saying: “What is not slightly distorted lacks perceptible appeal: hence it follows that irregularity, that is to say the unexpected, the surprise and astonishment, is an essential and characteristic part of beauty. Then there is the Japanese concept of wabi-sabi, which revere imperfect, transient and incomplete beauty. From now on and for the rest of 2021, Leo, I encourage you to ignore Eco’s lackluster beauty and cultivate your relationship with the most interesting genre.

VIRGIN (23 Aug-22 Sep): One of the most evocative passages in JRR Tolkien’s novel “The Return of the King” concerns the warrior Eowyn. It is written: “Then Eowyn’s heart changed, or else she finally understood it.” And suddenly her winter passed, and the sun was shining on her. I predict a comparable transformation for you in the near future, Virgo. There will be a fundamental change in the way your heart views life. When this happens, you will clearly perceive some secrets of your heart that were previously vague or inaccessible. And then the sun will shine on you with an extra glow.

BALANCE (September 23-October 22): Libra actress and author Carrie Fisher had more than the average number of inner demons. Still, she has accomplished a lot and has been nominated and won many professional awards. Here is the advice she gave: â€œBe afraid, but do it anyway. What is important is the action. You don’t have to wait to be confident. Hope you will use this strategy in the coming weeks, dear Libra. Now is a good time for you to work hard on your number one goal, regardless of your emotions at any point in time.

SCORPIO (October 23-November 21): Scorpion author Fyodor Dostoyevsky (1821-1881) had a gambling addiction for many years. At one point, he lost so much money betting on roulette that he had to take drastic action. He wrote a short story in record time – just sixteen days – to raise money to pay off his debt. The story was titled “The Player”. His hero was an unsuccessful player. Is there a comparable antidote in your future, Scorpio? A bet that somehow uses the problem to generate the cure? I suspect so.

SAGITTARIUS (November 22-December 21): in her poem â€œEscapeâ€, Michelle Tudor addresses a lover: â€œInside you: a dream raging to be released. She suggests that she would like to be a collaborator who helps and inspires her to release her companion’s dream. The coming weeks will be a great time for you to make a similar offer to an ally you love and ask that ally to do the same for you. And by the way: what is the dream within you that is raging to be released? And what is the dream inside your comrade?

CAPRICORN (Dec 22-Jan 19): Author Martha Beck has some helpful tips you can come back to in the coming weeks. â€œYou don’t have to know exactly what your ideal life will be like,â€ she writes. â€œYou just have to know what is better and what is worse. Start making choices based on what makes you freer and happier, rather than what you think an ideal life should look like. It is the process of groping for happiness, not the realization of the Platonic ideal, that creates our best lives.

PISCES (February 19-March 20): Why do humans have a much longer lifespan than other higher primates? Here’s a reason: grandmothers. Anthropologists suggest that earlier in our evolution, families with older females especially flourished. Grandmothers helped care for the children, ensuring better health for all as well as a higher reproduction rate than broods without a grandmother. Their longevity genes were passed down, creating more grandmothers. Fortunate! Having older women around us while growing up has been the key to the success of many of us. In accordance with astrological omens, I invite you to celebrate and honor the role that your own grandmothers and elders played in your life. And if you are a grandmother, celebrate and honor yourself!

Homework: Send a note of your last victory. Write to: [emailÂ protected]

How to invest in companies before their IPO?