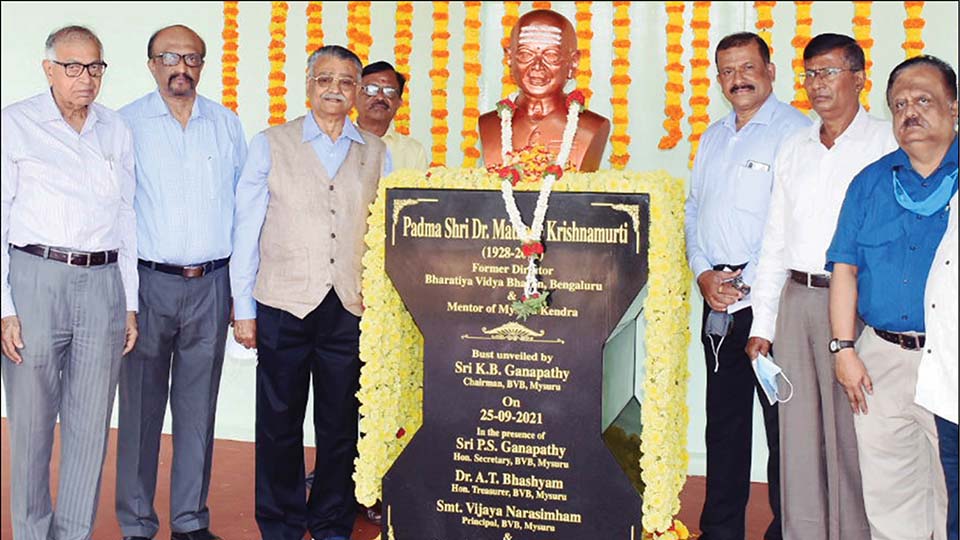 Mysuru: The bust of the late Dr Mathoor Krishnamurthy, former director of Bharatiya Vidya Bhavan (BVB), Bangalore, was unveiled at BVB premises in Vijayanagar 1st Stage here this morning by KB Ganapathy, founder-editor of Star of Mysore and chairman of BVB Mysuru Kendra.

Speaking on the occasion, KB Ganapathy said that Mathoorji, who was a man with purpose, vision, mission and foresight, established BVB in Mysuru.

Pointing out that Mathoorji, an iconic Sanskrit scholar and writer, was also instrumental in establishing BVB in London, he said BVB Mysuru Kendra initially operated from Mahajana College in Jayalakshmipuram, before moving to its own premises in Vijayanagar.

Recalling that he was a member of BVB from the start, Ganapathy said: â€œI studied at BVB, Bombay and as such, I have a sentimental bond with the Institution. Mathoorji came to Mysuru with N. Ramanuja to create BVB. Mathoorji shares a mother-son, guru-shishya, and country-citizen relationship with BVB. An inspiring figure that he was, Mathoorji encouraged us all to establish BVB in Mysuru, which is today one of the main educational institutions in the city. He added that Mathoorji’s scholarly speeches still remained fresh in the minds of the townspeople.

Dr Mathoor Krishnamurthy, known as Mathoorji for his scholarly discourses on Hindu epics, was born in 1929. A Sanskrit scholar and versatile writer, he had extensively studied great epics such as the Ramayana and the Mahabharata. As Director of BVB in Bombay, he was credited with establishing BVB in London, UK. He received Padma Shri in 2009 in recognition of his services to literature. He was conferred an Hon. Doctorate from Kuvempu University of Shivamogga in 2004. He died in 2011.

Americans are the most loyal to these insurance companies