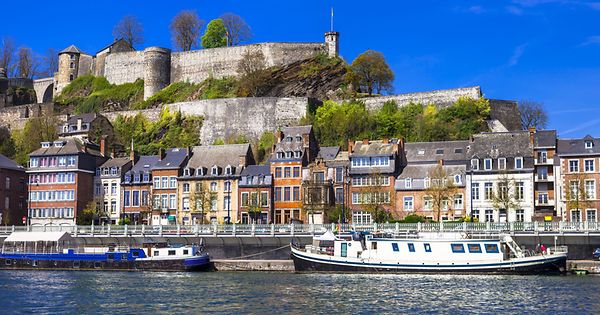 Namur, flanked by its imposing citadel, was once a thriving maritime and road hub at the confluence of the Sambre and the Meuse.

Its strategic military importance since Roman times meant that it was besieged and occupied countless times (much like the city of Luxembourg), leading to an unusual mix of architecture.

One hour and forty-five minutes from the city of Luxembourg, Namur, or Namen in Flemish, is an ideal destination for a day or a weekend. There are plenty of historical sites, museums, art exhibits, parks and river cruises, walks and bike rides, and a few bars to sample Trappist beer.

the Citadel which looks sternly the city was first fortified in Roman times and was the residence of the counts of Namur. One of the few citadels in Europe to be so well preserved, it presents architectural elements ranging from a keep built in the Middle Ages to parts dating from the 19th century. It was fortified in 1692 by none other than Sébastien Vauban, the French military engineer who also worked to fortify Luxembourg.

You can explore the barracks, underground tunnels and enjoy great views from the ramparts or from its bridge. Napoleon once called it a termite mound, partly thanks to its underground passages which cover around 500m. Within them, you can attend a sound and light show. You can also visit the Terra Nova Center to discover the 2000 years of history of Namur.

The climb is steep and the gates close at 6:30 p.m., but you can also take a cable car to spare your legs.

the Saint-Aubain Cathedral, located in the square of the same name, dates from 1751 and has a domed roof, although the original church is believed to have been built in the 11th century. The one you see today was erected by the Italian architect Gaetano Pizzoni in a neoclassical style. Inside is a 12th century altar (portable in case a quick exit is needed) belonging to the Counts of Namur and a crown belonging to Philippe de Namur which is said to include thorns from Christ’s own crown.

It is the only cathedral to be built in the Netherlands after 1559, so prepare to be dazzled by the decorative features, including columns, pilasters and cherubs, as well as paintings by Antoine Van Dyk and Jacobs Jordans.

Cathedral Treasury is a diocesan museum with 900 years of religious history and a collection of sculptures, paintings, medieval manuscripts and textiles.

the Church of Our Lady is to the east of this treasury, and contains the monumental tombs of Counts William I and II of Namur in its crypt.

Baroque St. Loup Church was built in the first half of the 17th century by Peter Huyssens. It has a three-storey stucco facade and Doric pillars in Meuse limestone. The carved confessionals and vaulted ceiling inside are worth a look.

The Palais des Congrès on the main square of Namur

the Congress Palace is the former building of the Namur stock exchange and is a fine example of Belgian architecture, located in the town’s main square. You can take a look at the statues, or sit in one of the cafes or restaurants. The city walls of Namur have disappeared but Parade you will find a belfry there, the remains of the Saint-Jacques tower which was once part of the medieval city walls.

For a bit of Belgian humour, the town square is home to statues of two bronze snails, one on a leash and one in a cage. Next to them are the figures of Francecwes and Joseph, characters created by designer Jean Legrand. The statues represent the rhythm of life in Namur, slower than a snail. Therefore, the creatures are captured so that they do not go too fast for the inhabitants of the city.

In search of Utopia aboard a giant turtle

Probably the most eye-catching statue or even sculpture is “In Search of Utopia” by Jan Fabre, which overlooks the city from the Citadel and depicts a giant tortoise, ridden by a man.

Where the rivers meet you will also find a statue of a flying horse – Bayard Horse, from the epic tale sung by troubadours in the time of Charlemagne. Four brothers rode a unique and exceptional horse, Bayard, which could gallop at high speed and leap canyons. Unfortunately, when the brothers were captured, Bayard was drowned in the Meuse.

You will find a bronze sculpture on the roundabout at the entrance to the Pont des Ardennes which pays homage to the waders, who not only walked, but jousted on stilts. Their games date back to the Middle Ages. The tradition lives on and is exhibited at the Wallonia Festival in September, with jousting on stilts in front of the cathedral.

Five museums are located close to each other in Namur, if you fancy an afternoon of cultural and historical exploration. These include the Diocesan Museum, the Museum of Ancient Art, MusAfrica, the Museum of Archeology and the Museum of Decorative Arts.

Rue de Fer, you will find the Ancient Art Museum, located in the 17th century Hôtel de Gaiffier d’Hestroy. It features exhibits on artifacts from the region from the Middle Ages and Renaissance, including the work of local goldsmiths, copper utensils and ivory.

The museum also contains the treasure of Oignes monastery (goldsmithery), including two important works by Pater Hugo who lived in the monastery in the 13th century. One of them is the Gospel of 1230 decorated in enamel, the other the goblet of Gilles de Walcourt dating from 1238.

On the same road you will find the Felicien Rops Provincial Museum, dedicated to the 19th century artist and presenting his works and those of his contemporaries. The museum houses his 1878 etching La Mort Qui Danse, which shows a skeleton dressed as a dancing woman. It is inspired by the gothic romantic works of Charles Baudelaire, with whom Rops was befriended. Rops was also a well-known caricaturist, with lithographs on social and political satires which were published in Belgian newspapers. The exhibits are themed and make for an interesting visit.

the Archaeological Museum houses a Namur collection from the Roman, Frankish and Merovingian periods. It is considered one of the best collections of artefacts from the first to the seventh century in Belgium. She moved into new accommodation in 2020 at 7 rue Joseph Saintraint.

At number 3 on the same road is the Decorative Arts Museum in a mansion classed as an exceptional heritage site. It houses a superb collection of decorative art from the 17th to the 19th century including furniture, clocks, paintings, sculptures and crystal. Many pieces were made by craftsmen in the workshops of Namur for the local aristocracy.

A small but informative museum, MusAfrica, discovers the Belgian Congo, with information on the culture, the weapons, the flora and the fauna, as well as a very friendly staff. It is not supported by the government and asks for donations. The museum is currently closed for renovations, but check the website for when it will reopen.

the computer museum has a collection of machines from different brands like Unisys, IBM, but more interesting, a guided tour (in French) tells you the history of computing from mainframes to mini-computers.

the Strawberry Museum is located in Wépion, a district of Namur renowned for the cultivation of strawberries. It’s small, with only five rooms that explore the history of strawberries, with many artifacts and objects. The friendly owners can tell you a lot about growing strawberries and you can taste fresh strawberries when in season or try the produce of the fruit, including strawberry ice cream.

Louise Marie Park may not have the family attractions, but it is home to ducks and geese, and is beautifully landscaped for a leafy walk, with the remains of an ornate bridge and plenty of picnic spots. You can rent a barbecue area for free.

A boat trip is another way to see the city. Namur Cruises has heated boats and an onboard bar, and gives live explanations of the sights you pass. It leaves near the Jambes bridge and you can drive to Wépion (for the strawberry museum) passing some of the most beautiful villas in the town.

You can take a self-guided walking tour of the city with details here.

Head toward Ratin-Tot to try their Ratin 16. The café-bar was established 400 years ago in 1616 (hence the brew’s name), and the beer is a heady 7.5% alcohol. The chapter may not be as old, but also has a great selection of beers. Nestled behind the wood-decorated cathedral, its friendly atmosphere invites you to stay. You can find a list of restaurants and bars here.

For More information on places to visit and stay in Namur, go to the tourist office website.

55 Taurus Quotes That Describe The Stubborn Aesthete Of The Zodiac