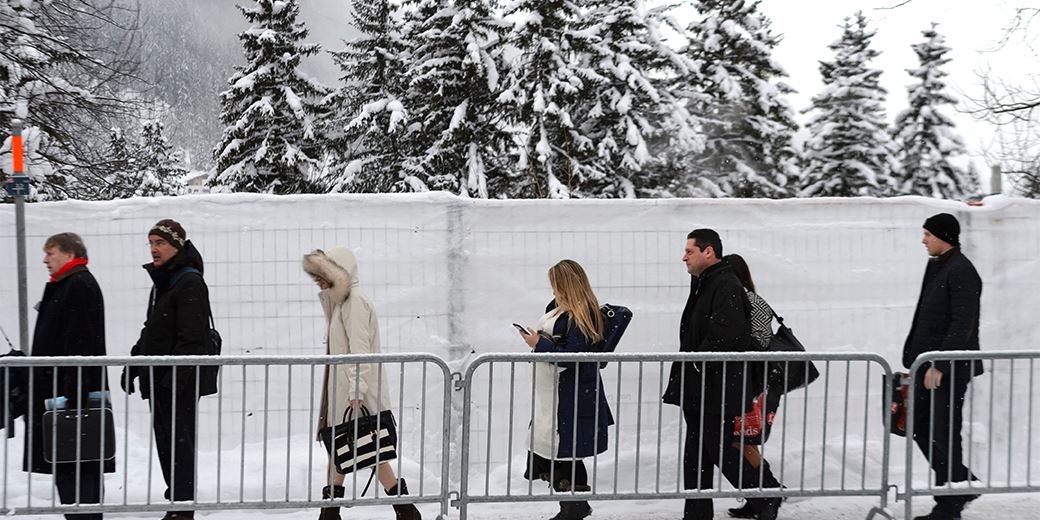 Book review: ‘Davos Man’ is behind your ESG fund

Is the anti-democratic spirit of the Davos Forum behind your ESG fund?

It seems like a strange question, but New York Times economics correspondent Peter Goodman gives a convincing answer in the affirmative in his new book, Davos Man. While the book delves into deep questions about the relationship between business and government, it is far from a philosophical treatise – relying instead on detailed reports to show how capitalists convince themselves that the pursuit of profit drives always to just public policy.

Davos Man derives much of its power from exuberant but cynical vignettes. Goodman skewers Salesforce founder Marc Benioff for dodging corporate taxes, BlackRock CEO Larry Fink for his firm trade debt he was helping the government assess, and Blackstone founder Stephen Schwarzman , for flipping real estate in low-income communities after raising rents. Along the way, he cites billionaires on their moral virtue and good citizenship, while raising concerns about wealth inequality, low union participation and lack of enforcement of antitrust laws.

That approach may put off some hard-core capitalists, but Goodman has the charm of an older type of journalist, almost extinct now, who at least doesn’t inflate his rich stories.

The World Economic Forum’s annual conference in the Swiss Alps resort of Davos, where heads of state and business titans rub shoulders with rock stars like Bono and Mick Jagger, is the source of an animating notion behind the ‘ESG (environment, social and governance) investing.

Economist Klaus Schwab, who founded the World Economic Forum and served as its executive chairman, also developed “stakeholder capitalism”, which is the idea that companies are responsible for the various groups affected by their operations – shareholders, workers, customers, environment. .. basically everyone.

This idea drives the Alpine event and seems to contrast sharply with Milton Friedman’s notion of “shareholder capitalism”, according to which the sole responsibility of business is to maximize profits for shareholders.

But Goodman shows that stakeholder capitalism is actually a greater enhancement of the power of capital because it assumes that corporations will deal with political issues better than governments – even if they have not been democratically elected to do so. Friedman never had that in mind for business, which he assumed was under government control, more or (hopefully) less.

“The word stakeholder is a talisman for Davos Man, its use bespeaks lofty principles…a demonstration that the speaker cares about loftier matters than the raw enrichment of shareholders,” says Goodman.

But stakeholder capitalism, according to Goodman, is just a cover for Davos Man’s concern with the bottom line and ambition to control those who claim to rule it.

After lowering corporate tax rates, sending jobs to places where labor is cheapest to increase returns for shareholders – and in the process exacerbating inequality in developed countries to the point to encourage populism and authoritarianism – Davos Man shows his true genius by getting the world to accept him as the source of just public policy. Anyone who disagrees, including advocating for higher tax rates or more wealth redistribution, is simply anti-capitalist.

In other words, the usual means by which we smoothed over the rough edges of capitalism in the past – government – ​​“has been twisted by the billionaire class.”

The most direct link between capitalism seeking to control public policy and your ESG fund is Larry Fink. Goodman cites Fink’s 2018 BlackRock shareholder letter to lay out the philosophy of stakeholder capitalism: “To thrive over time, every company must not only deliver financial performance, but also show how it is making a positive contribution to the society”.

Fink made BlackRock a $7 billion asset manager. It has also made the colossus a leading provider of ESG funds, the fastest growing segment of actively managed investment funds. This is a beneficial development for BlackRock shareholders (but not necessarily investors in the company’s funds) because actively managed funds, ESG or not, can charge far higher fees than index funds. cheaper.

In the 36-month period to March 2022, global inflows into funds with some “sustainability” criteria (another abstract substitute for “ESG”) in their prospectuses exceeded $1 billion, according to Morningstar. Flows to BlackRock’s sustainable funds alone, including those in its iShares division, amounted to $190 billion over that period.

But the benefits for billionaires and big corporations go far beyond additional management fees.

After Fink’s 2018 shareholder letter and Jamie Dimon’s 2019 updated statement of intent that business would no longer be all about making money, “billionaires had changed the way business was viewed in the world. popular imagination, remaking itself as a source of vitality”. and hey, contrary to supposed government incompetence,” Goodman writes. “The executives were benevolent masters of their domain, their virtue beyond reproach, so that any countervailing interest could be dispensed with as gratuitous shackles to their dynamism.

The fact that capital wrests control of public policy from democratically elected governments helps us find the source of the phrase “Davos Man,” which Goodman says comes from the late political scientist Samuel Huntington.

Huntington coined the phrase in a 2004 essay titled “Dead Souls: The Denationalization of the American Elite”, referring to the World Economic Forum held in Davos and the typical globe-trotting capitalist forum participant with low allegiance, at best. , to a specific country. . (Huntington also called this character a “gold-collar worker” or a “cosmocrat”.)

Davos Man is beyond politics, a cosmopolitan traveling the world and living for whatever profit he can make by sourcing materials here, assembling them there, selling the finished product in a third location and keeping its executive offices in a fourth jurisdiction (usually the one that will apply the lowest tax rate to its businesses).

Huntington’s article had a somewhat conservative tinge, worrying about the soul of Davos Man, especially the loss of patriotism and religion among the wealthy.

He also anticipated political instability. “Substantial elements of the elite are increasingly divorced from their country, and the American public, in turn, is increasingly disillusioned with its government,” Huntington wrote – twelve years before Donald Trump was elected president.

Goodman is more interested in how wealthy elites are eating an increasingly larger slice of the economic pie, which may also have been a factor in Trump’s victory in 2016.

Democrats and progressive Republicans, as well as populist movements in other Western liberal democracies, can be seen to share an animosity against the complete capture of liberal democracy by Davos Man, who many without capital believe has ceased to work for them.

This means your ESG fund could be the latest step in how capital has captured liberal democracy – but also made it vulnerable to populist and authoritarian backlash.