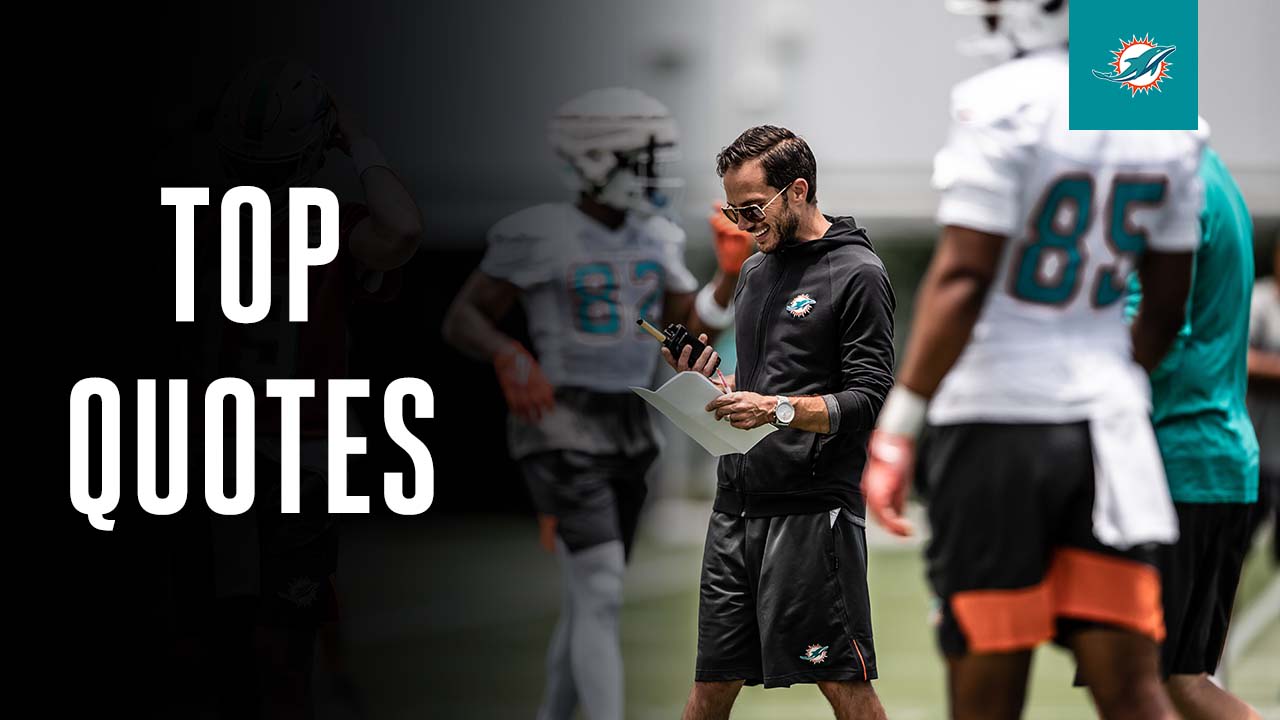 “It’s a cool, cool opportunity that hasn’t been explored until now, and I talk to these guys a lot and I’ve thought about it a lot. We’ve had an offseason that we’re fully committed to. We we’ve learned a lot. We’ve improved. I think the coaches have done a great job and the players have really attacked this offseason, which I guess I would equate to the first quarter of a game. I’m at the comfortable saying the way they “I worked – I feel like we have a lead in the first quarter. What does that mean ? Nothing. How many games do you win in the first quarter that you lose and vice versa. So we’ve positioned ourselves to compete at a standard that we’ve said from the start that we want to compete against.”

(On his positivity as a coach)

“I would say I’m just a positive person only because the way I see the world is that you care about the things that you can affect to move forward and to be present. I wouldn’t say I really approached like, “hey, I want to be the positive coach” because I don’t necessarily think I am. I know that’s how people take it from afar, but really I just want the players are only focused on improving their craft and being the best player you can be, so I feel like if you’re able to be yourself, that’s one less thing to which you think isn’t getting better and perfecting your craft. So that opportunity cost is something important to me, so I want players to feel like they can be themselves. I think also than a concerted effort in a group forum – hence team sports, just this collective endeavor e – is fun. The grind is fun, although in the present sometimes it doesn’t feel like it. But more than that, I know and I think the players would attest that the most I What’s important is that they feel like they have an honest coach because I can’t help them if I can’t give them honest reviews; and don’t get me wrong, there are many times in my way where I’m very, very direct because that’s what the players depend on. But it’s not really a positive. Rather, it is the elixir of trying to maximize a given player’s ability to perform, which is a coach’s job.”

“My style – I think I learned a lot from every situation. I think it’s kind of the learner’s responsibility when you’re in a situation. You don’t necessarily imitate your behavior towards a person. You notice what happens when A or B happens. For me, I just want there to be no doubt from a player regardless of my intention, my goal and where my motivation comes from. So you don’t really model yourself on anybody. You get used to that when you grow up as an only child with a single mom, I didn’t really have an example of how to be a guy or whatever. it’s either else and it’s kind of manifested in my professional life where you take things from everyone and all the backgrounds you have I would say it’s probably different just because I never really got myself Modeled on anybody I’m just kinda – I’m honest e with a very deliberate intention and a real goal to help players improve and I think you create a culture, not because this guy acts a certain way, but because you are really a group of people and the people you employ and the people you work with, if that’s allowed, they dictate the terms of what the culture is. And that’s what I think you see day after day. I’m not like, ‘Hey guys, have fun.’ It’s more like, “Hey, it’s your guys’ team.” Understand this now, own it and how far do you want to take it? And the results are a collection of hungry young individuals that we are in June so we haven’t played a game. But for where we are right now and how they come together I’m very happy with this part of the process.”

“It’s the sixth different team I’ve been in the same offense my whole career and we’ve just evolved it – it’s the sixth different stop, you gain some wisdom in that. There’s compound variables you’re trying to weigh. How good is the existing defense? Is everyone starting from the same starting point? Are they taking calculus classes while we’re learning algebra? “It’s an extreme case compared to other stoppages in my career because the defense was very, very productive and turning over a lot of talented players. We also had an inordinate number of additions, so it was a group of people who were learning to play together. With all these circumstances that my career has given me, I feel extremely happy and confident where we are at. We have just enough taste of what we are good at and what we need to work on. We have many deliberate pros that when the guys are all in and thinking about it on break and spending their summer getting away and recharging but at the same time revisiting everything they’ve learned there’s a huge leap forward in these two first days of (training camp). Realistically, if I’m going to play by play, player by player, I’m not looking for touchdowns or the number of negative plays. I watch how people progress and improve every day against a defense that hones their skills. I’m very happy with where we are now, which means absolutely nothing. There are a few plays I’d like us to make here or there, but overall as an offense I’m very comfortable and confident going into the summer with what we’ve had the opportunity. to do and against whom we are going to face. It’s a huge challenge and on both sides of the ball I think we’ve improved this offseason because the guys come to work and challenge each other, are talented, have high expectations, are competitive and try to win the day.”