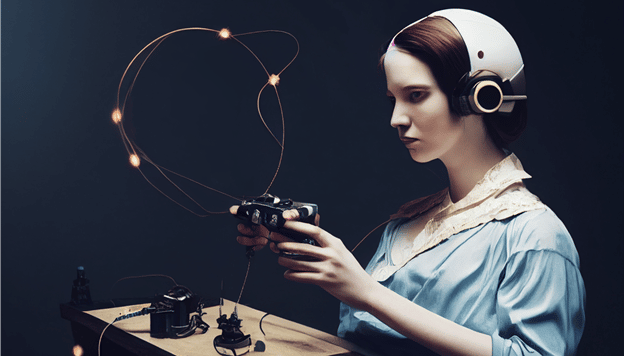 Alien invasions. Gritty dystopian megacities. Battlefields teeming with superheroes. As one of Hollywood’s finest concept artists, Drew Leung can visualize any world you can think of except one where the AI ​​takes its toll.

He would know. He’s spent the last few months trying to get there, testing all the AI ​​tools he could. “If your goal is to use AI to replace artists, you’ll find that really disappointing,” Leung said.

However, pros and amateurs alike find these new tools intriguing. For amateur artists – who barely know which way to hold a brush – AI gives them almost miraculous abilities.

The trend sparked a thunderous discussion in the artistic community. Some are relying on AI to speed up their creative process – doing in minutes what used to take a day or more, like instantly generating mood boards with countless iterations on a theme.

Others, citing problems with collecting and managing the data used to train these systems, are wary. “I’m frustrated because this could be really exciting if done right,” said illustrator and concept artist Karla Ortiz, who currently refuses to use AI for art.

The NVIDIA Creative Team gave a taste of what these tools can do in the hands of a skilled artist during a talk by NVIDIA Founder and CEO Jensen Huang. opening speech to the most recent NVIDIA GTC Technology Conference.

Highlights included a woman representing AI created in Leonardo da Vinci’s drawing style and an image of 19th-century English mathematician Ada Lovelace, considered by many to be the first female computer programmer, holding a modern gamepad.

After months of experimentation, Leung – known for his work on more than 20 epic films, including Black Panther and Captain America: Civil Waramong other blockbusters – compares AI art tools to a “kaleidoscope” that combines colors and shapes in unexpected ways with a twist of your wrist.

Used this way, some artists say the AI ​​is most interesting when an artist pushes it hard enough to break it. Artificial intelligence can instantly reveal visual cliches because it fails when asked to do things it has never seen before, Leung said.

And because AI tools are powered by large amounts of data, AI can expose biases in collections of millions of images — like misrepresentation of people of color — because it struggles to produce images outside of a narrow ideal.

Such promises and pitfalls put AI at the center of conversations about the intersections of technology and technique, automation and innovation, which took place long before the existence of AI, or even computers.

With the motto “You press the button, we do the rest”, George Eastman’s affordable portable cameras made photography accessible to everyone in 1888. It took years for the 19th century promoter and photographer Alfred Stieglitz, who played a key role in transforming photography into an accepted, future art form.

Over the next century, new technologies, such as color photography, offset printing and digital art, inspired new movements ranging from expressionism to surrealism, from pop art to postmodernism.

The emergence of AI art continues the cycle. And the technology that drives it, called transformers, like the technologies that drove past art movements, drives change far outside the art world.

First introduced in 2017, transformers are a type of neural network that learns context and, therefore, meaning from data. They are now among the most dynamic research areas in AI.

A single pre-trained model can perform incredible feats – including text generation, translation and even software programming – and forms the basis for the next generation of AI capable of transforming text into detailed images.

Diffusion models that power AI image tools, such as Dall·E and Dall·E 2, are generative, transformer-based models that refine and rearrange pixels over and over again until the image matches. to the textual description of the user.

Others arrive. NVIDIA GPUs – the parallel processing engines that make modern AI possible – are being refined to support ever more powerful applications of the technology.

All of these possibilities sparked intense conversations.

Artist Jason Allen sparked global controversy by winning a contest at the Colorado State Fair with an AI-generated painting.

Lawyer Steven Frank has renewed old conversations in art history by using AI to reassess the authenticity of some of the world’s most mysterious works of art, such as ‘Salvator Mundi’, left , a painting now attributed to da Vinci.

Philosophers, ethicists, and computer scientists such as Ahmed Elgammal of Rutgers University wonder if it’s possible to separate the techniques that AI can mimic with the intentions of the human artists who created them.

Ortiz is among a number of people who are raising tricky questions about how the data used to train AI is collected and managed. And once an AI is trained on an image, it can’t unlearn what it was trained to do, Ortiz says.

Some, like New York Times writer Kevin Roose, wonders if AI will end up taking jobs away from artists.

Others, like Jason Scott, artist and archivist at the Internet Archive, dismiss AI art as “no more dangerous than a filler tool.”

Such swirling conversations – about how new techniques and technologies are changing the way art is made, why art is made, what it represents, and how art, in turn, remakes us – have always been an element of art. Perhaps even the most important element.

“Art is a conversation we are all invited to,” wrote American author Rachel Hartman.

Ortiz says that means we have to be thoughtful. “Do these tools help the artist, or are they there to be the artist? she asked.

This is a question we should all ponder. Controversially, anthropologist Eric Gans links the first act of imbuing physical objects with a particular meaning or meaning – the first art – with the origin of language itself.