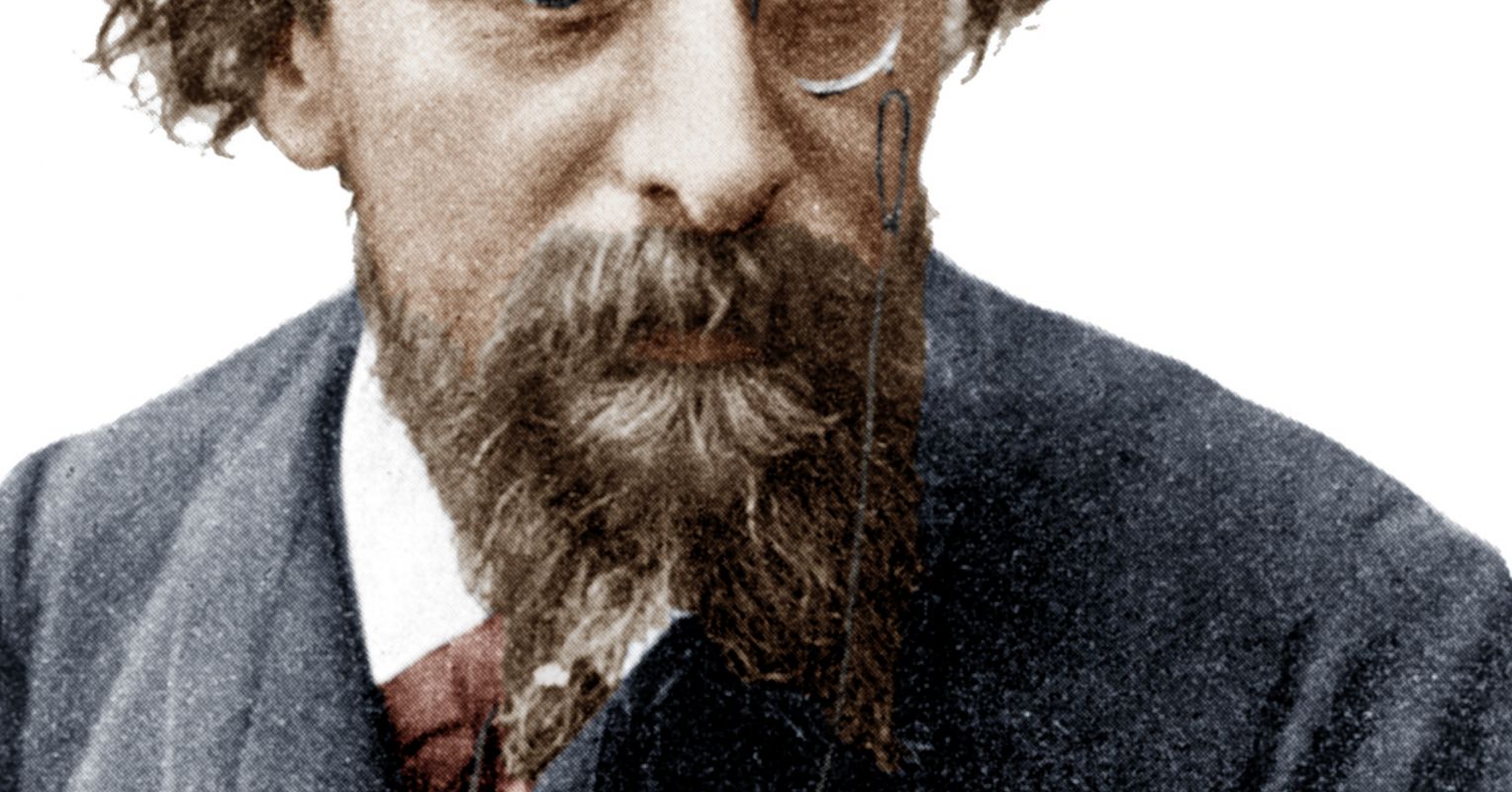 French novelist Alphonse Daudet (1840-1897), who suffered from tertiary syphilis and wrote about his pain in “La Doulou”. Colorized engraving, c. 1892.

“Each night a horribly painful spasm in the ribs… The armor is exactly what I feel, a hoop of steel crushing my lower back cruelly. Hot coals, stabs of pain, sharp as needles “, wrote the 19th century French novelist Alphonse Daudet. “Pain finds its way everywhere, in my vision, my feelings, my sense of judgment; it is an infiltration”, he added (Daudet, The Doulou, 1930; 2018).

Daudet is little known as the novelist, playwright, poet and journalist he was today outside of academia – “a largely forgotten writer” (Barnes, 2018). He was, however, quite well known in his time by authors like Henry James, who translated one of his novels, and Charles Dickens (Barnes). Marcel Proust had been a young protege of Daudet (Dieguez and Bogousslavsky, 2005), and Daudet was considered among great literary figures, including Baudelaire, Flaubert and de Maupassant, who suffered from syphilis (Barnes).

Tertiary syphilis, tabes dorsalis, or neurosyphilis, was a “wasting disease” (Barnes) for which there was no effective treatment at the time. It usually appears 15 to 30 years after the initial infection and results in demyelination of the posterior columns of the spinal cord and the posterior roots of the spinal nerves. Patients developed progressive motor ataxia, with uncoordinated movements, sensory abnormalities and intense pain, among its many symptoms (Tatu and Bogousslavsky, 2021).

Daudet wrote: “My poor carcass is hollow… there are long days when the only part of me that is alive is my pain. “Sometimes I feel like I don’t own a part of myself, the lower half. My legs merge.

Daudet suffered from considerable generalized muscle atrophy and presented as a “shrunken old man” in his mid-forties (BMJ, 1932). Daudet’s mental capacity, however, was unaffected except when he was on morphine, to which he became addicted. His handwriting deteriorated but his vision, although significantly impaired, was largely preserved.

Daudet will live 12 more excruciating years after the insensitive Jean-Martin Charcot, “the greatest neurologist of the time”, and teacher/colleague of Sigmund Freud (Camargo et al, 2018) flatly declared Daudet “incurable, lost when he was aged 45 (Barnes).

Despite his symptoms of unbearable constant nerve pain and progressive incoordination, Daudet continued his writing, with ten subsequent publications and plays (de Montalk, 2019).

Among his abundant writings, Daudet started a diary, “notes”, The Doulou, documenting his experience. He wrote: “Are words really helpful in describing what pain really feels like? The words come later, “when things have calmed down.” They only refer to memory and are either helpless or deceitful,” he added.

“Pain is the black hole into which language seems to disappear” (Frank, 2011). “Pain – has an element of emptiness” in which “it can’t remember / When it started – or if there was / A time when it wasn’t…” (Emily Dickinson, Collected Poems, Life XIX).

As “the quintessential private experience, pain severs our engagement with the world…our isolation is exacerbated by misunderstanding others” (Biro, 2011). Fortunately, Daudet persevered and converted his private experience into a public testimony of his suffering.

The Doulou, translated in recent years by author Julian Barnes, In the land of painwas first published by Julia Allard, Daudet’s wife, in 1930, well after her husband’s death, aged 57, in 1897.

His wife, herself a writer, and “his intellectual and creative companion” (de Montalk) and whose portrait was painted by Renoir (Dieguez and Bogousslavsky), “saved him from a dreadful life of carefree debauchery” (Barnes). While her syphilis slept, Daudet and Julia would have two sons and a daughter who was conceived during one of her stays at a therapeutic spa.

Before the discovery of penicillin in the late 1920s which treated the early stages of syphilis and virtually eliminated tertiary syphilis, there were some truly horrific therapies, including the use of arsenic, poignantly depicted in the movie . Outside of Africa, based on the memoirs of Isak Dinesen.

The cruel and ineffective Seyre suspension that Charcot recommended to Daudet.

Of the many treatments Daudet was subjected to, however, Charcot would recommend Seyre’s cruel traction technique. Originating in Russia (Dieguez and Bogousslavsky), this procedure involved suspending a patient, sometimes only by the jaw or elbows, for several minutes in the hope of easing the movement difficulties typical of tertiary syphilis. The so-called “treatment” would cause the patient “excruciating pain” without any benefit (Barnes); Daudet suffered 13 of these suspensions (Dieguez and Bogousslavsky; Daudet).

Daudet, who said to himself “Don Juan injured… Don Juan amputated”, was not a faithful husband, but he tried to protect Julia from the incessant pain he suffered. When Julia walked into the room, he would stand up and his voice was filled with optimism, barely able to speak of the pain just before and slump in his chair once she was gone (Barnes). “Our pain is still new to us, but becomes quite familiar to those around us. It quickly wears down its welcome, even for those who love us the most… Everyone will get used to it except me. Compassion loses its edge” , he wrote.

“Suffering is nothing. It’s about preventing those you love from suffering… I don’t want to read the weariness and boredom in the eyes of those who are dear to me, ”continues Daudet. Lynn Greenberg offers a similar sentiment: “I could only offer the record answer: What more can I say? I feel exactly the same as yesterday” (The broken body: memories, 2009).

“The Sleep”, by Frida Kahlo, 1940. Kahlo, who suffered from chronic pain secondary to polio and a serious streetcar accident, created a “disease narrative” with visual images.

“Stories of illness…are acts of witnessing, telling truths that are too often glossed over because they speak” to what we would all rather ignore (Frank). Artists, as well as writers, can create their own “disease stories”, as visually evidenced, for example, by the paintings of Mexican artist Frida Kahlo (1907-1954). Kahlo contracted polio at the age of 6 and then suffered a devastating streetcar accident that led to a life of debilitating chronic pain, multiple spinal surgeries and eventually a leg amputation (Courtney et al, 2017). She used an image of a skeleton and various metal contraptions in The sleep, as well as nails, knives, swords and arrows – weapons – in his other paintings as metaphors for his pain (Biro).

“The Gout”, by English artist James Gillray, 1799. Art Gallery of Ontario, Toronto. Artists and writers can pass on ‘illness stories’.

“Nothing but terror and despair at first; then, little by little, the mind, like the body, adapts to this appalling condition,” wrote Daudet. The power of creativity, whether written or artistic, allows the spirit to endure.