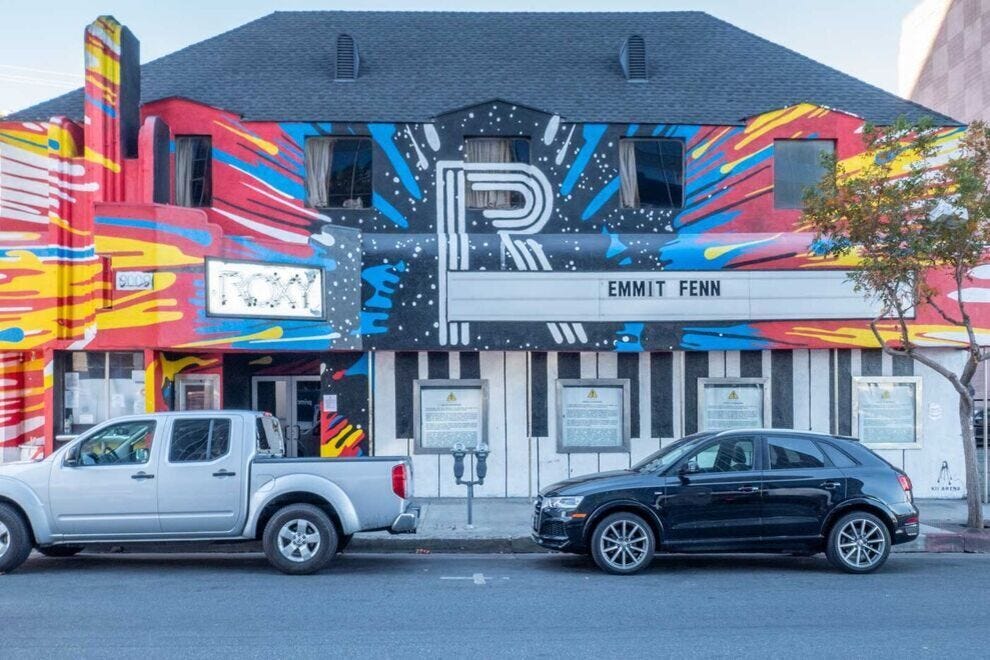 The majority of those crazy Sunset Strip stories you hear about motorbikes in hotel lobbies, flying TVs and Hollywood vampires happened in West Hollywood. At the time, it was apparently an unincorporated section of Los Angeles County. Since 1984, West Hollywood has been a city in its own right. And if you’re looking for music history, there’s no other place like it in Southern California.

Up-and-coming artists are still playing at legendary venues like The Roxy, Viper Room, and Whiskey a Go Go. There’s even a walking tour dedicated to the hidden history and general debauchery of the pre-grunge Sunset Strip.

For this piece, we give you a list of hotels, bookstores and concert halls that you can still visit. And, besides decades of music history, they all have one thing in common: to this day, you never know who you might run into at one of these legendary West Hollywood landmarks for fans of punk, hard rock and metal.

The former Continental Hyatt House on the corner of Sunset and Kings has changed names several times since Keith Richards dropped a TV in room 1015. Today it’s the Hyatt concept hotel, Andaz.

Although you no longer have to dodge flying TVs as you stroll through Sunset, current managers aren’t above capitalizing on the property’s notoriety. The hotel’s Riot House Restaurant and Bar faces Sunset Blvd and serves breakfast and dinner. Their breakfast menu includes quotes from former frequent guests Little Richard and Robert Plant. The latter’s quote is conveniently placed above the libations section.

Their slogan is “Bookseller of the Great and the Infamous”. If you have 20 rock star bios, chances are Book Soup has hosted dedications for half of them. It’s the largest independent bookstore in West Hollywood. Every week there is at least one autograph or reading session.

Recent metal icons include Rob Halford and Anthrax bassist Frank Bello. Along with having one of the most impressive collections of classic album-focused 33 1/3 books, they also sell vinyl.

The Parc Suite is where Ozzy Osbourne locked himself away for months after being fired from Black Sabbath. It was 1979, and the future reality star thought her life was over. So he checked into a hotel that a broke, declining rock star with annual drug use above his fan’s average annual income couldn’t afford.

Instead of enjoying this retreat-like hotel on the corner of Sherwood and Knoll, the Ozzman rarely left his one-bedroom suite. He claims he only opened the door to the pizza delivery and his dealer.

While the nearby Book Soup attracts general bibliophiles, Mystery Pier Books is compact and exclusive. Many of their first edition books predate the United States itself. Famous clients include Elvis Costello and Jimmy Page. The latter is a well-known collector of Aleister Crowley memorabilia. The Led Zeppelin guitarist, who was partly responsible for the unofficial renaming of the nearby Hyatt House, picked up several first-edition Crowley works from LA County’s most haunting independent bookstore.

If you’re only going to visit one bar on the Sunset Strip, make it the Rainbow. Many rock legends whose pictures adorn the walls of the main dining room still come here. The Lemmy statue sits next to the outdoor bar, also known as Lemmy’s Lounge.

To this day, it’s not uncommon to see a table or two reserved for the same people who made the Sunset Strip the musical equivalent of the far less exciting Hollywood Walk of Fame.

Since 1973, several stadium-level artists have performed at this 500-seat venue on their way up. Artists from Social Distortion to Guns N’ Roses recorded their first live albums here. The Ramones played their first California gig at the Roxy. This is also where footage of the “Rock ‘n’ Roll High School” concert was filmed.

The nearby Rainbow Bar & Grill has Hollywood’s legendary vampire haunt, while the Roxy has the upstairs bar, On the Rox. Although it’s a little hidden and very exclusive, there are times when fans and other tourists are allowed in for a drink or two. Don’t make the tourist part too obvious.

Marquess of the Sunset

The main difference between the Sunset Marquis and the other hotels on this list is that the likes of Bruce Springsteen and Debbie Harry stay here when they’re in town. There is even a recording studio under the property. There is also a book of photographs, which chronicles who has visited over the years.

Although we highly recommend staying here, please respect guest privacy. The recording studio is generally off-limits to guests, and the staff discourages videotaping on the property.

This 500 capacity venue started out as a place where 60s folk bands could master their craft. Punk, new wave and metal bands all made it a mandatory stop in the 1980s. Early in the decade, punk bands like Flipper and Bad Religion came to promote their debut albums.

If you think places like The Troubadour, The Whiskey, and The Roxy are small, The Viper Room is about half the size. Tom Petty and the Heartbreakers played the inaugural Viper Room show at the request of then co-owner Johnny Depp. Sadly, this newcomer to the Sunset Strip is remembered by many for the untimely death of River Phoenix and the early solo performances of a strained John Frusciante, but legendary artists like Pearl Jam and the Stone Temple Pilots have played here without incident. .

When it comes to legendary punk, hard rock and metal bands, it’s easier to list those who haven’t played here. The 500-seat Sunset Strip venue is such an important part of music history that it is included in the Rock and Roll Hall of Fame. In 1969, Alice Cooper recorded “Live at the Whiskey A Go-Go”. Twenty years later, Soundgarden recorded their concert film “Louder than Live” on the same stage. Metallica discovered bassist Cliff Burton while playing Whiskey with his band Trauma.

Around the corner at 1140 North Clark Street, you can see where Mötley Crüe members once shared an apartment. This is where afterparties were held after some of their early shows on the Sunset Strip. They returned to the Whiskey in 1989 to film the music video for “Kickstart my Heart”.

The 50 Most Romantic Engagement Quotes